The fate of Cuba's laid-off workers 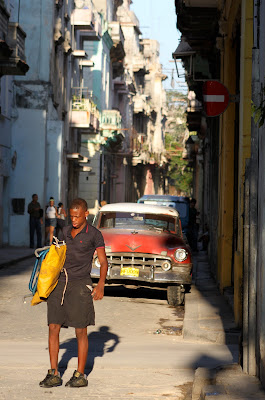 Some Cubans say that the most coveted government jobs are ones where employees are able to pilfer state resources, everything from towels and soap to kitchen tile and frozen chickens.
And so as Cuba plans to lay off more than 500,000 workers, some will be bracing for what they'll lose, not so much the wages, but the stolen government property that helps them survive.
Ripping off government-run companies in Cuba doesn't carry quite the same stigma that employee theft has in the United States. Many Cubans justify pilfering resources because the socialist government has not fulfilled its pledge to provide for workers.
The socialist government has traditionally controlled most of the job market while tightly restricting private enterprise.
Most Cubans have no choice but to turn to the government for employment. But almost no one can live on the wages of state-run companies. So many people steal from those companies.
What will happen when a half million Cubans will no longer be able to slip that peso out of Papa Fidel's wallet every morning?
P.S.
After I wrote those lines, I felt guilty for being so cynical. I wondered if I was being fair. While thinking about that, I found a story on the Miami Herald's Cuban Colada blog that backs up the idea that employee theft is common. Cuban Colada translated a story from El Mundo. The story is called "The Cost of Eating on the Island."
Here are a few excerpts:


HAVANA – In Cuba, nothing is as complex and stressful as feeding oneself. "It's terrible. Putting three meals a day on the table wipes away 90 percent of my income," says Caridad, a 39-year-old pediatrician.
"Picture my case," says Orlando, a 46-year-old construction worker. "I have four children, a wife and an ailing mother. I do not receive money from abroad and am not paid a penny in hard currency. Do you know how I manage for my family to dine on rice, beans and sometimes pork? By stealing. Just that simple. "
On the island, almost everything is difficult. But the food situation borders on insanity. Let me give you an example. A professional couple with two children and a combined salary of 1,000 pesos (US$45) can buy only enough food for 14 days. The rest of the month, they must "invent" [improvise.]

The story also describes how Juan, 26, a repair-shop employee, struggles to pay for groceries every month.


Long ago, his parents replaced the lunch with a slice of bread with a slice of guava paste, or a flour fritter seasoned with chives. Their breakfast is a cup of coffee, when they can find it. They can't ask their son for anything more; he spends his entire salary on food.
There's more. In his workshop, Juan often steals whatever is available. Light bulbs, paint, screws, alcohol, anything. That extra money he also invests in "jama" (food). [...]