The top photo was taken of a manatee in Cuba. The bottom two photos, taken in Florida, show the same scars. Credit: Aquatics Mammals.
A Florida manatee and her calf have been spotted in Cuba, more than 400 miles from their usual habitat, in the first documented case of Florida-to-Cuba migration, scientists say.
The adult manatee, known to scientists as CR131, was first photographed in the Crystal River on Florida's northwest coast in 1979.
Scientists continued seeing and photographing the same manatee through July 2006. The animal had distinctive scars - probably from a boat propeller - on its back.
A manatee with those same scars appeared in January 2007 at the Camilo Cienfuegos Power Plant in Santa Cruz del Norte, a town east of Havana. The animal was traveling with her calf, according to an article in the June 2010 issue of Aquatics Mammals. The six-page article said:


This is the first report of manatee use of a power plant canal in Cuba and the first documented case of movement by manatees from Florida to Cuba.

Florida manatees often seek refuge - and warmth - in the canals of power plants. The Aquatics Mammals article said CR131 and her calf may have gone to the Cuban power plant to escape "exceptionally rough seas." 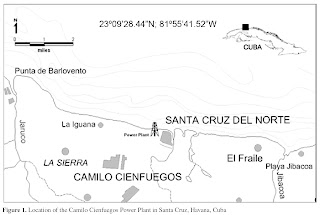 The manatees journeyed some 700 kilometers (434 miles) to reach Cuba, according to the authors, Anmari Alvarez-Alemán, Cathy A. Beck and James A. Powell.
Powell first photographed CR131 in the Crystal River in December 1979. The article said:


The last documented Florida sightings of this female were in Crystal River on 22 January 2005, then in the Wakulla River, further to the north, on 4 July 2006, with a small calf.
Based on the photographic documentation from January 2005 and July 2006, the overall body condition of CR131 appeared to be good.

When seen in Cuba, the calf was estimated to be about 1.5 to 2 m long or between 6 to 9 mo old, based on size-age ratios of Florida manatee neonates. Judging by the relative size differences of the calf between the July 2006 and January 2007 sightings, it was assumed that these sightings were of the same calf that CR131 traveled with from Florida to Cuba.

Just why the adult female ventured south is unknown. The article said:


It is uncertain whether CR131 swam to Cuba deliberately...; was accidentally displaced; or moved with the currents from the Gulf of Mexico, fortuitously reaching Cuba.

Whatever the case, the scientists reported:


Exchanges of individuals between Florida and Cuba may have important genetic implications, particularly since there appears to be little genetic exchange between the Florida manatee subspecies with populations of the Antillean manatee subspecies in Puerto Rico and the Dominican Republic.

Manatees are considered endangered in both the United States and Cuba, "but little is known about the status of the species in Cuba," the article said.
Posted by alongthemalecon at 6:52:00 AM

Without a doubt, Along the Malecón is one of the best Cuba blogs!

Cuba Journal -
Thank you. You are waaaay too kind...

Past is History - Future is Mystery

One of the most compelling political issues today is the question of totalitarianism and the effect of these governments and regimes on its citizens and the world. Artists continue to create powerful images that draw attention to these abuses. This mixed-media exhibition deals with repressive issues in the artists' own countries and cultures of origin. They include Pablo Trejo, Alejandro Mendoza, Juan Si-Gonzalez, Maritza Molina, Ramon Williams, Cesar Beltran, Antuan and Nelson Garrido.

This is very greatful and informatic helpful Can I quote a post in your blog with the link to you? i want to book mark it !
Bandhavgarh Wildlife Tour