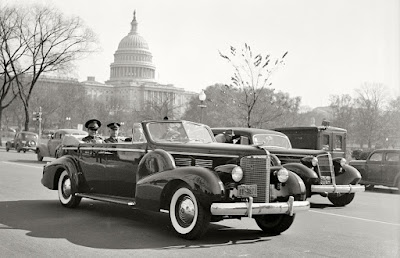 No, I'm not talking about Fidel Castro. Fulgencio Batista went to Washington in 1938
Penultimos Dias posted an interesting photo of a jai alai fronton in Havana, circa 1904. The photo is from a website called Shorpy, where I found this old photo of Fulgencia Batista in Washington in 1938.
Batista led a five-member junta at the time, according to his biography. He was president from 1940 to 1944. He was forced out in 1944 and lived in exile in the United States. He returned to Cuba as leader of a U.S.-backed coup in 1952. Castro forced him out in 1959.
Posted by alongthemalecon at 5:42:00 PM