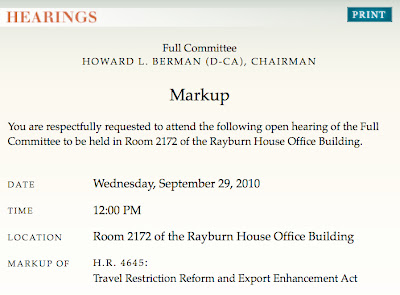 The hearing begins at noon Wednesday in Washington
What is a congressman's vote worth these days? $3,000? $10,000? $100,000?
We may get some insight into that on Wednesday when the House Committee on Foreign Affairs considers H.R. 4645, also known as the Travel Restriction Reform and Export Enhancement Act.
More than half the committee's members get money from political action committees, or PACs, that oppose loosening Cuba travel restrictions, according to the U.S. Cuba Policy & Business Blog. The blog described lawmakers' thinking:


...Why should I vote to lift the ban when in the end, the people who want to keep the ban in place are the ones who are actually supporting my re-election?
It is a political and self serving calculation that has gone unchallenged session after session. So what is going to unfold now is a high stakes political poker game. Will the members listen to the constituents...or will they listen to their anti-travel handler$?

In November 2009, a non-profit group called Public Campaign released a report on the influence of money and Cuba legislation. It said:


Since the 2004 election cycle, a network of Cuban-American donors and political action committees (PACs) has donated in excess of $10 million to more than 300 federal candidates in order to thwart any changes in the U.S. embargo of Cuba. Recipients are Democrats and Republicans, House and Senate members, rank-and-file members and party leaders. Contributions are sometimes coordinated and mutually reinforcing. These donations were often targeted to members of Congress who changed their positions on U.S.-Cuba policy to align them with opponents of change, sometimes within days or a few weeks of making the switch.
With support growing for reforms of U.S. policy toward Cuba, including lifting the ban on travel by all Americans to the island, and with congressional hearings on travel to Cuba about to take place before the House Foreign Affairs Committee, the question is whether reasoned policy or old-style politics driven by the corrosive influence of campaign donations will prevail.

Public Campaign listed lawmakers who had received the most money from PACs and Cuban-American donors who want to maintain economic sanctions against Cuba. Five of those lawmakers are on the House Foreign Relations Committee. Here they are, along with the amount of money they had received at that time: 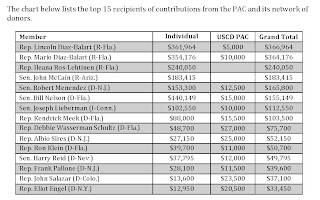 Some lawmakers on the committee began to shift their vote on easing relations with Cuba after they began receiving money. These include: 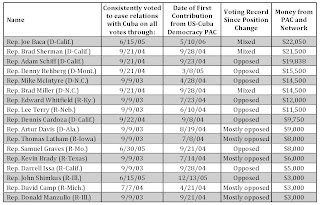 Most of the lawmakers on the House Foreign Relations Committee have never been to Cuba.
Posted by alongthemalecon at 7:51:00 AM