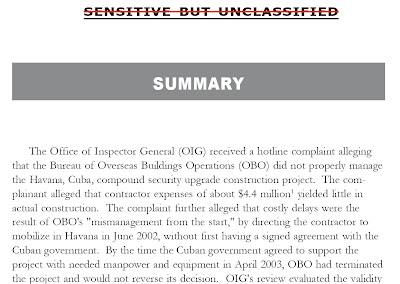 Tipster alleged "mismanagement from the start"
The Office of Inspector General investigated a claim that a U.S. government contractor spent more than $4 million on a security upgrade at the U.S. Interests Section in Havana, but accomplished next to nothing with the money.

The trouble began in 2002 when U.S. officials in Washington asked the contractor to begin preliminary work before obtaining a crucial signed agreement with the Cuban government.
The contractor stayed on the job, spending money, but could not start the project without the collaboration with the Cuban government, the Office of the Inspector General found. And Cuban officials evidently were in no rush to get going. 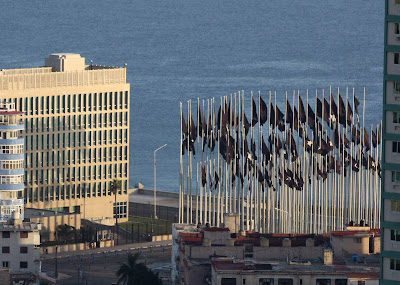 U.S. Interests Section, at left. Since the photo was taken, Cuban workers have taken down most of the flagpoles.

James Cason, who was chief of the Interests Section at the time, signed off on a draft report of the OIG investigation, calling it accurate.
I skimmed the report and it looks to me like it blames Washington officials and Cuban officials, not Cason, for the costly delays.
Perhaps Cason welcomed the investigation over frustration with the delays. He worked as a Foreign Service officer for decades and is, no doubt, very familiar with government contracts and audits. And since retiring as an ambassador, he has evidently done some work as a senior inspector for the State Department's Office of Inspector General, his online resume shows.
He has years of experience in government and a diverse background, which can't hurt as he tries something new, running for mayor of Coral Gables.