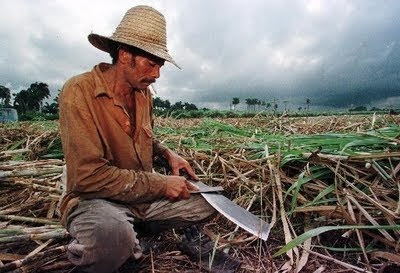 A Cuban sugar worker sharpens his blade. Credit: The Cutting Edge News
Rui Ferreira, a reporter and editor for Spain's El Mundo newspaper, sent me a few prime examples of Fidel Castro admitting his mistakes. He told me Karen Wald was "absolutely right" when she told me on Sept. 12 that Castro has confessed key errors in the past.
Ferreira's comments are especially interesting because he witnessed one of Castro's biggest mea culpas ever, his admission that campaign to harvest 10 tons of sugar in 1970 was a "disaster."
Ferreira told me almost every cubanólogo seems to have forgotten Castro's speech on July 26 of that year. Ferreira wrote:


I never wrote about this but I was there. I was 11 years old and my parents were invited to the speech at the Revolution Square. Them, my brother and I, were there at "la tribuna" when Fidel gave his speech. Karen doesn't quote him in her message to you but I remember very well what he said. After explain what a disaster the 10 million sugar harvest was he said, and I quote him in Spanish: "(ante este desastre), si alquien tiene alguna duda el primer ministro pone su cargo de inmediato a la disposición y renuncia".
Immediately almost 1 million people there start screaming, "no, no, no".
It was a moment that impress me so much, at 11 years old, that I never forget it since he was admitting an error. Remember that I was coming from Portugal, a country living under a Fascist dictatorship and we were not used to watch a primer minister renouncing his post in front of the people. Can you imagine if those million Cubans start screaming: "yes"?
After that, officially, there is only one more time were he admitted being wrong but I thing that he was being more sentimental than real. It was after the end of the Soviet Union. He gave a speech complaining about what he call "la chatarra" that the Soviets sent to Cuba as an economic aid. He was referring to those antique tractors, buses and cars that you must have seen during your stay in the island.
In the last 20 years a lot of people told my about internal videos about Fidel being critical on things like Angola, Ethiopia, voluntarism, Minfar and Minint... but that's only hear say.

Instead of stepping down, he fired everyone involved with La Gran Zafra of 1970 for not meeting the azucarera goal.

I remember talking about this in my buddy's kitchen one morning over a glass of orange soy yogurt, several years ago.