New Mexico scholar: Let Cuba evolve at its own pace 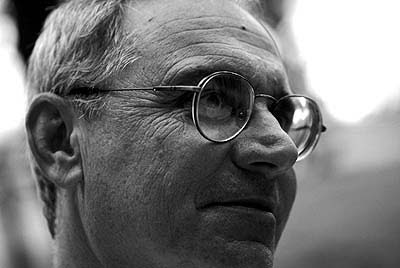 Nelson Valdes.  Photo credit: U. of Denver
I don't think the American government ought to interfere in the internal affairs of another nation unless that country poses a clear and imminent threat to the United States.
We should worry first about pressing and unresolved problems at home.
But if I were someone who wanted to change Cuba, and if faced with only two choices - economic sanctions against Cuba or engagement - I'd choose engagement.
With that in mind earlier today, I wrote,"If you really want to change Cuba, flood the place with people, money and ideas."
That drew a thoughtful response from Nelson Valdes, the retired New Mexico sociologist who has studied Cuba for many years.
His suggestion: Let Cubans handle their own problems without any outside interference.
Referring to the idea of flooding Cuba "with people, money and ideas," Valdes wrote:


Although I am sure that was written with the best of intentions, it is wrong. One should go to Cuba because it should be a learning experience and an enjoyable one for the person who is visiting. I doubt that a visitor to any other country goes with the colonialist mentality of changing "the other." Besides, that would be the ultimate narcissistic enterprise.

Which leads me to note:

There are TWO positions on the matter of changing Cuba. One claims that isolating the island and not trading with Havana and limiting travel will eventually put an end to the regime or force it to become "democratic." Another position says: let there be travel, let there be trade, and the Cuban regime will then change and become democratic.
BOTH positions are wrong on a number of counts:
Indeed, what everyone ought to do is to say: it is up to Cuba's internal dynamics to determine what is best for its own people and there should not be interference from anyone outside the island.

"...the embargo was designed to impose suffering and hunger on Cubans in the hope that they would rise up and overturn their government."

"The only foreseeable means of alienating internal support," the Department of State insisted as early as April 1960, "is through disenchantment and disaffection based on economic dissatisfaction and hardship."

I've yet to see anyone come up with an ethically acceptable reason for the forced suffering of an entire nation. The entire premise of U.S. foreign policy vis-à-vis Cuba is in violation of the norms of behaviour for members of the UN and the OAS, not to mention basic decency.

Zacaman,
Good point. And as those of us who travel to Cuba know, Cubans suffer severe economic hardship. We see it firsthand. But sometimes people who make policy never see the results of their action.