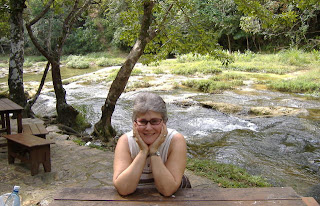 Karen Lee Wald. Photo credit: Cuba Inside Out
The other day I said I thought it was rare for Fidel Castro to admit he's wrong. I wrote:


I've heard many of his speeches. I've read his writings. It is not terribly common for Castro to admit any failing. He usually points the finger elsewhere.

Karen Lee Wald took offense at that, telling me I'm the one who's wrong. She wrote:


If you've really heard/read many of his speeches (including but not limited to the time before and after you were there) you should know that is blatantly inaccurate. I've seldom heard any head of state admit his own personal responsibility or failings as often as Fidel has, esp since 1970 when he spoke of failure of ten million ton harvest....
you should do a search of his speeches with key words pointing to culpability of the leadership, himself included....

Wald is a writer, activist and educator who "has been explaining, defending and teaching everyone she could reach for over thirty years about the history and reality of the Revolution in Cuba," according to Walter Lippmann's website.
I wrote her back, saying:


Karen,
Thanks for the feedback. You are welcome to send me examples of instances when Fidel Castro admitted his mistakes and I'll post those.

If anyone thinks there have been moments when Castro should have admitted he was wrong, but didn't, let me know and I'll post those comments, too.
Wald also was kind enough to send a link to Fidel Castro's speeches. I haven't waded through all of them, and maybe Castro has admitted he's been wrong more often than I thought. You'd really have to dig into his speeches and analyze that question to know just how often it happens.
It would also be interesting to see how often Castro and other Cuban leaders have blamed the United States for their troubles. That's the flip side of admitting you're wrong - blaming someone else.
To be sure, U.S. economic sanctions have hurt Cuba. But are they to blame for all Cuba's economic troubles?
I give Raul Castro credit for admitting some of the failings of the economic system and taking steps to try to improve production.
Still, I don't see officials taking responsibility for the deterioration of the Cuban economy and the country's infrastructure.
Instead, officials use the embargo as a catch-all scapegoat. That's why I was surprised to read Jeffrey Goldberg's interview, which quoted Fidel Castro as saying that Cuba's economic model doesn't work.
We now know that the former Cuban president said Goldberg misunderstood him. He said he really meant just the opposite of what Goldberg wrote. Castro said he meant to say that capitalism "doesn't even work for the United States or for the world..." So how could such a system work in Cuba? he asked.
But, of course, Goldberg didn't understand that.
He misinterpreted Castro.
It was the reporter's fault, not Castro's.
Posted by alongthemalecon at 7:00:00 PM

Wait a minute, he said our system might be wonderful.

Bonzai,
Thanks for your comment. That is an interesting quote that you spotted. Fidel Castro said the U.S. system of government might be wonderful, but Cuba's was better. Here's what Castro said:

Here we do not have any multi-party system either, nor do we need it. The political level of our people, the information level of our people is much greater. In surveys that have been made in the United States an astonishing high number of people do not know where Nicaragua is, where the countries of Latin America are. They don't know what countries belong to Africa, what countries belong to Asia. There is an incredible ignorance, astonishing. That does not happen here. Your system might be wonderful, but at least the results of ours are better undoubtedly.

Tracey, here's something else you may find interesting from the 80's.

The joke in Cuba is, Tortolo moved so fast to avoid the Army Rangers, the only thing that remained were his boots.

Yet another source of discontent is that Fidel Castro and his brother Raul (the Minister of Defense and Castro’s deputy in all other positions) use Angola as punishment duty for recalcitrants. A case in point is Colonel Pedro Tortolo, who was the commander of Cuban military personnel on Grenada when the U.S. forces invaded. Tortolo was ostentatiously court-martialed and sent to Angola as a private, along with most of his Grenada command.
http://www.theatlantic.com/magazine/archive/1988/08/cuba-havana-apos-s-military-machine/5932/

Bonzai,
The Tortolo story was quite a deal! I had never heard of that. Thanks for passing it along. Tracey

How does "the system doesn't work for us any more" mean "capitalism in the US doesn't work"?

I hope the brainwashed Wald isn't educating my kids.

I also have trouble understanding Castro's clarification.
A Reuters story gave Julia Sweig's interpretation of what Castro said:
"He wanted to say that 'although we're changing our model that doesn't mean we're importing U.S.-style capitalism."