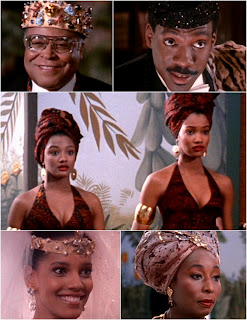 Coming to America, 1988. Photos: movie screenshots
Cuba analysts continued Wednesday trying to figure out why Howard Berman postponed a hearing to consider a proposal to loosen the travel ban.
Berman said Tuesday he delayed the hearing because today would be the last day Congress was in session and it was "increasingly likely that our discussion of the bill will be disrupted or cut short by votes or other activity on the House floor."
The California lawmaker pulled the plug as anti-embargo forces were gaining momentum, said Anya Landau French, editor of The Havana Note. She wrote:


Unfortunately, Berman simply ran out of time. Which is all the more disappointing when you take into account the leviathon coalition put together by the bill's main sponsor, Collin Peterson, and then expanded by Berman in the months following Peterson's June markup of the bill. In the 48 hours before the expected vote alone, supporters were everywhere at once.

These supporters included:
The Hill had a different take:


Lacking the votes necessary for passage, a House panel has postponed action on a bill that would lift travel restrictions to Cuba....Foreign Affairs Committee Chairman Howard Berman (D-Calif.) has been trying to secure 24 votes on the 47-member panel to approve the bill, but an analysis by The Hill shows only 16 members have publicly committed to it.


No evidence contained in the Hill article sustained the reporters' opinion that the mark-up was postponed because travel reform proponents faced defeat.
Members of the Committee who had not cosponsored travel legislation were prepared to support it in mark-up, among them Gary Ackerman of New York.


"Berman told me he would not bring the measure up to lose," said Rep. Gary Ackerman (D-Queens, L.I.), "but that with my vote, the measure would pass."
Ackerman, who always voted against easing travel restrictions, said this time is different.
"After giving it a lot of thought, I have changed my position," he said. "I plan to vote in favor."

McAuliff added that he believes Berman was telling the truth when he said he didn't think there was enough time to discuss and vote on the bill. McAuliff said:


On its face Chairman Berman's explanation is credible.

McAuliff, along with Landau French, know these issues intimately. I take their opinions seriously. And they may be right in their analysis of Berman's decision.
But I wonder about Berman's explanation. He is a veteran in Congress. He's the big-shot chair of the House Committee on Foreign Relations. If he wants to put the issue to a vote and put a time limit on debate, he can do that, can't he?
After all, he runs the committee.
His failure to act reminds me of a scene from "Coming to America."
King Jaffe Joffer, ruler of Zamunda, wouldn't allow his son, Prince Akeem, to pick his own wife because that would break with royal tradition.
Queen Aoleon told him he could change the rules because he was, after all, the king.
When the king argued, the feisty queen shot back: