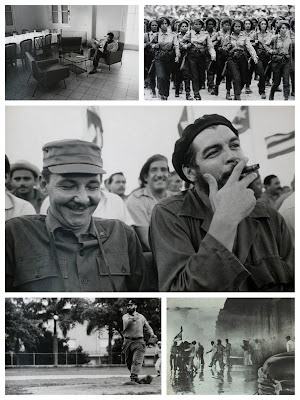 
Mr. Lockwood’s best-known book was the one born of his marathon interview with Mr. Castro, which unspooled over a full week in Cuba in 1965. The discourse ranged over Marxism, the Cuban missile crisis, American race relations, sex, prostitution and much else.
It was vital, Mr. Lockwood believed, that American readers be given a full portrait of a man known here as a cipher at best, a demon at worst.
“We don’t like Castro, so we close our eyes and hold our ears,” he wrote in the book’s introduction. “Yet if he is really our enemy, as dangerous to us as we are told he is, then we ought to know as much about him as possible.”

The Center for Cuban Studies this month is paying tribute to Lockwood. The center is also display the work of another photographer who made a name for himself in Cuba.
Constantino Arias was the house photographer at the Hotel Nacional. He captured photos depicting such vices as gambling and prostitution, but these pictures were never published because of censorship during the rule of then-President Fulgencio Batista.
Now, though, a collection of Arias' photos is on display at the Center for Cuban Studies. A collage of Arias' work appears below: 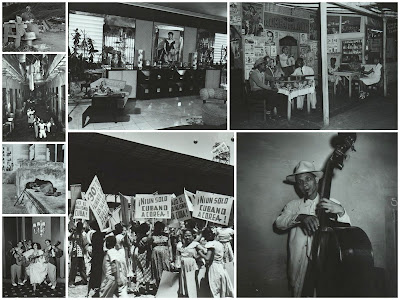 Photos by Constantino Arias. Source: Center for Cuban Studies
The center's press release on the Arias exhibit is below:
CENTER FOR CUBAN STUDIES ART SPACE TO SHOW RARE PHOTOGRAPHS
Constantino Arias, The Years Before: 1945‐1958

In association with Arpad A. Busson and The International Art Heritage Foundation
Constantino Arias (1920‐1991) was a free‐lance photographer whose photos provide a rare and what is probably the most complete black and white picture of Havana society in the 1940s and 50s.
On September 16, the Center for Cuban Studies will open a month‐long exhibit of 38 Arias images at 231 West 29th Street in Chelsea.
Arias struggled to make a living in pre‐revolutionary Cuba where his only regular job was as house photographer for Havana’s Hotel Nacional from 1941 to 1959. The
hotel was a hangout of mostly U.S. tourists and inside the hotel Arias photographed the casinos and shows, the tourists at play; on his own time, he photographed ordinary Cubans at places like the Rumba Palace Bar, the terrible poverty (some of it just outside the doors of the hotel) and the growing political unrest. Arias, a slight quiet man, moved quickly through the streets, photographing anything and everything, mostly in hopes of selling his photographs to the glossy magazines, so he could give away the political photographs to magazines unable to pay. However, most of his photographic images of the gambling, prostitution and politics were never published because of censorship.
With the Revolution, Arias’ life changed. He graduated from the School of Journalism at the University of Havana in 1961 and worked in the photographic laboratory of Bohemia magazine. His early photographs and negatives were stored in boxes in the home he shared with wife Fina and their daughter. The Center for Cuban Studies first heard of Arias from the great cinematographer and photographer Mario Garcia Joya (Mayito) whose photographer wife Marucha (Maria Eugenia Haya) had begun collecting Arias’ photos in the 1970s. As a historian and critic, she found Arias’ photos the most complete picture of Havana society in the 1940s and 50s, quite unlike what was usually published of Havana before the revolution. (His archive consisted of approximately 10,000 negatives). Arias himself was no longer interested in printing, so Mayito began to print from many of Arias’ negatives so that people would see his incredible work. As a result, between 1972 and 1980 he received several prizes given by the Cuban Journalists’ Union for his historical reportage.
In 1985, with the help of Mayito and Marucha, the Center for Cuban Studies organized its first photography exhibit, a survey of 40 years of Cuban photography, at the Ledel Gallery in New York. The show included many of the images In the current exhibit. Arias and Fina, Mayito and Marucha were all able to come to New York then.
Now, 25 years later, the Center is giving Arias his much‐deserved one‐man show, thanks to the generosity of Arpad A. Busson and The International Art Heritage
Foundation, which has acquired most of the Center collection. (More of Arias’
photographs can be seen in the forthcoming exhibit “Cuba in Revolution” opening
September 24 at the International Center of Photography.)
The Center will also pay homage to its founder, photojournalist Lee Lockwood, who died July 31 at the age of 78. Lee began photographing the Cuban Revolution from the first day, January 1, 1959 and the 20 photographs the Center will show from its extensive collection of his work continue Cuba’s story from where Arias leaves off. The photographs are from the first decade of the Cuban Revolution.
For further information or to obtain images of either the Arias or Lockwood photographs, contact the Center.