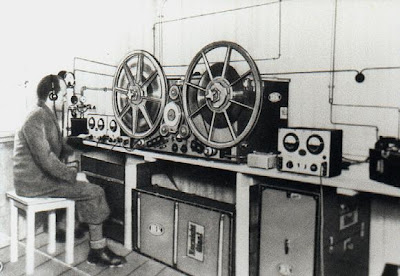 Somebody taped the interview, right? Photo credit: Radio Museum Fürth
Jeffrey Goldberg, a writer for Atlantic magazine, said he did not misunderstand Fidel Castro. He writes:


...Fidel says that his answer meant "exactly the opposite" of what Julia Sweig and I heard him say. Just as a language experiment, here is what the opposite of his statement would sound like: "The Cuban model works so well for us that we want to export it." But he didn't say this. What he said was -- well, you've read what he said. I'm not sure how this statement --accurately quoted, according to Fidel -- could mean anything other than what it means.

Goldberg cited this report from CNN:


On Friday, Castro said he was correctly quoted, but that, "in reality, my answer meant exactly the opposite of what both American journalists interpreted regarding the Cuban model. My idea, as the whole world knows, is that the capitalist system no longer works for the United States or the world," he said. "How could such a system work for a socialist country like Cuba?"
Castro called Goldberg "a great journalist." "He does not invent phrases, he transfers them and interprets them," he said. "I await with interest his extensive article."

Castro does not dispute that Goldberg quoted him accurately. I would be interesting to hear the interview or at least a segment of it. If anyone taped the interview, just put it online for everyone to hear.
Posted by alongthemalecon at 7:14:00 AM