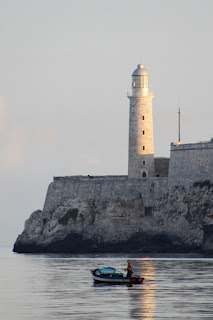 
We call for this change because our current policy limits Americans’ freedom of movement while also undermining our national security, and prevents our nation’s best ambassadors – the American people – from engaging directly with the Cuban people at a time when such contact would serve our nation’s interests and goals.
By increasing people-to-people contacts with Cubans, the United States will not be doing the Castro regime any favors; we would actually be doing the opposite. What the Castro regime fears most is a thawing of its relations with the United States, and in particular, allowing its citizens to have direct contact with the American people.

The officers include retired Army Col. Colonel Lawrence Wilkerson. He has an interesting background. In 1966, he dropped out of college and volunteered to fight in Vietnam. He was a helicopter pilot and logged more than 1,100 combat hours.
He went on to become deputy director of the Marine Corps War College at Quantico and was later an advisor to former U.S. Secretary of State Colin Powell.
After retirement, Wilkerson criticized the planning and execution of the Iraq War.


In an interview that aired on the PBS news magazine NOW...in Spring 2006 Wilkerson claimed that the speech Powell made before the United Nations on February 5, 2003, laying out a case for war with Iraq, included falsehoods of which Powell had never been made aware. He said, "My participation in that presentation at the UN constitutes the lowest point in my professional life. I participated in a hoax on the American people, the international community and the United Nations Security Council."

Given his willingness to challenge the status quo, it's not surprising that Wilkerson would oppose the ban on travel to Cuba.
Posted by alongthemalecon at 5:40:00 AM