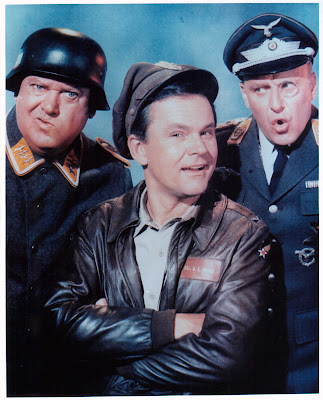 Credit: Hogan's Heroes Fan Club
Asked about a recent article asking if Roger Noreiga and James Cason may have broken the law as they carried out pro-democracy programs in Cuba, Noreiga told Along the Malecon:


Americans can be proud that this is one of a handful of countries that has supported the aspirations of the Cuban people to claim control of their future from a cruel Stalinist regime. I am proud of being a fierce advocate for democracy, and I am confident that our efforts were carried out in full compliance with the spirit and letter of the law. Only in (Saul) Landau's Cuba is freedom "chaos" and the promotion of democracy and the rule of law "illegal." I welcome a full debate on this matter because we must take stock of whether we are doing enough today and because we cannot forget that Landau's chums in the regime have taken an American hostage -- Alan Gross -- for daring to connect Cuba's Jewish Community to the outside world.


I wonder if Landau watched Hogan's Heroes and cheered against the POWs.