Why Vietnam and not Cuba? a travel ban foe asks 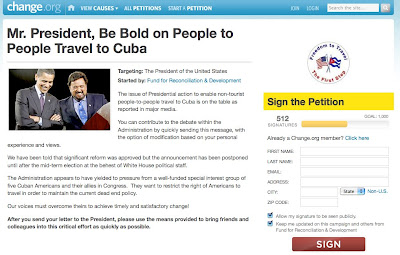 Here is a link to a petition asking President Obama to loosen travel restrictions to Cuba. As of this morning, it had 513 signatures.
John McAuliff, founder and executive Director of the Fund for Reconciliation and Development, started the petition. He says it doesn't make sense that the United States can have normal relations with Vietnam, but not Cuba. Writing in today's Huffington Post, he says:


...we have carried a grudge against Cuba for five decades, insisting that even the potential of change in our relationship requires first modification in their form of governance and domestic acts like the release of political prisoners.

It's been a different story when it comes to Vietnam, he says.


At no point along the way to normalcy did we require that Vietnam change its system of government, release political prisoners or adopt our standards of human rights.

And today, he says:


...we are Vietnam's largest export market, a major source of foreign investment and second only to China as a source of tourists. Presidents, prime ministers, secretaries of state and foreign ministers make regular warm visits to each other's capital.