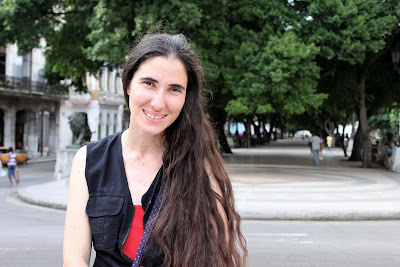 Outside Cuba, she's a hero. Inside, she's an enemy of the state.
Cuban blogger Yoani Sanchez has been given yet another international prize.
The International Press Institute today named Sanchez its 60th World Press Freedom Hero.
IPI Interim Director Alison Bethel McKenzie said:


Sanchez’s tremendously important work provides a glimpse into what is otherwise a closed world.

McKenzie said the blogger "represents a future where the power of the internet can be harnessed to promote free speech. We are proud to know Yoani and to award this prestigious prize to her.”
Sanchez, whose blog is called Generacion Y, has racked up several high-profile awards since starting her blog in 2007.
TIME magazine named her one of the world’s 100 most influential people in 2007.
Among other honors she's received:
Some Cuban officials contend that the U.S. government pushes for - and perhaps secretly finances - at least some of the cash prizes Sanchez has received. The goal, these Cuban officials contend, has been to discredit the Cuban revolution.
The blogger's supporters say she's unpopular with the Cuban government because she writes the unvarnished truth about the socialist state.
Cuban authorities have not allowed Sanchez to leave Cuba to pick up any of her international awards.
Ted Henken, who writes the El Yuma blog, asks if that will change this time around. He writes:


Now that Raul has allowed Juan Juan Almeida, as well as the critical musicians Los Aldeanos, Gorki Aguila, and Silvito El Libre to travel outside of Cuba recently, I wonder if Sanchez will be permitted to return to Europe to receive her prize. Vienna and Bratslava are right next door to Zurich where Sanchez lived for 2 years between 2002-2004. It would be a glorious return for her a short 6 years later!

Link:
Along the Malecon's Yoani & the Digital Revolt page
Posted by alongthemalecon at 7:04:00 PM