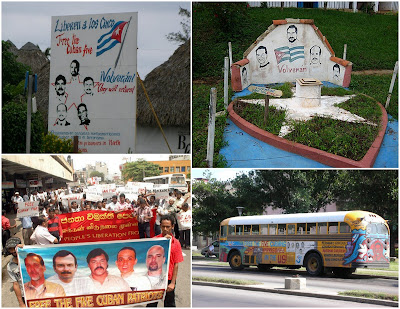 Signs of support for Cuban Five
Amnesty International said it has "serious doubts about the fairness of the proceedings" leading to the conviction of five Cuban agents serving prison terms in the United States.
AI said it is concerned about "the prejudicial impact of publicity about the case" on the jury in Miami.
If the courts can't consider these concerns, then the Obama administration ought to review the case "through the clemency process or other appropriate means."


Amnesty International takes no position on whether the Cuban Five are guilty or
innocent of the charges for which they have been convicted. However, having
reviewed the case extensively over a number of years, the organization believes that
there are serious doubts about the fairness and impartiality of their trial which have
not been resolved on appeal.

Amnesty International’s concerns are based on a combination of factors. A central, underlying concern relates to the fairness of holding the trial in Miami, given the pervasive community hostility toward the Cuban government in the area and media and other events which took place before and during the trial. There is evidence to suggest that these factors made it impossible to ensure a wholly impartial jury,
despite the efforts of the trial judge in this regard.

The report - written in British English, which uses such spellings as defence, not defense - also questions whether Gerardo Hernández should have been convicted of conspiracy to murder. AI said:


Although Amnesty International is not in a position to second-guess the facts on which the jury reached its verdict, it believes that there are questions as to whether the government discharged its burden of proof that Hernández planned a shoot-down of BTTR planes in international airspace, and thus within US jurisdiction, which was a necessary element of the charge against him.

The report also has some useful background in the case: