Candidate's company is a Google ghost 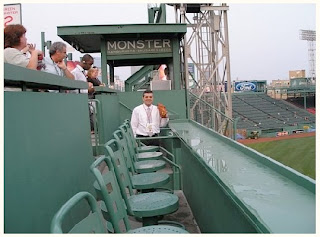 
Republican congressional candidate David Rivera has amended his state financial disclosure forms to erase any mention of consulting work for the U.S. Agency for International Development -- days after USAID officials said they had no records showing Rivera worked for the agency.

In his original disclosure forms, Rivera, a four-term state representative from Miami, said he worked as an ``international development consultant'' for USAID for seven years, through a company called Interamerican Government Relations, which Rivera founded in Puerto Rico. But USAID officials told The Miami Herald that they had no record of Rivera or his company.

OK, now search for "Interamerican Government Relations" in Google. None of the search results are more than a week old.
All this raises questions:
The Herald said:


Rivera's attorney, Richard Coates, told the Florida Commission on Ethics in an Oct. 15 letter that Rivera was ``not required'' to disclose any additional income from the lawmaker's consulting work from 2003 to 2009.

I wonder what Rivera hiding? Why not just disclose all income? What is Rivera afraid of?
His opponent is Joe Garcia, former head of the Cuban American National Foundation in Miami.
Garcia posted the Herald story on his Facebook page and wrote:


This is deeply troubling. 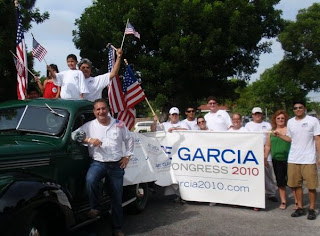 
On November 5, 2002, David Rivera was elected to the Florida House of Representatives from Miami-Dade County representing District 112; a position to which he has subsequently been re-elected three times. Currently, Representative Rivera serves as the Chairman of the House Full Appropriations Committee. This committee oversees the state of Florida’s budget in areas such as education, transportation, housing and economic development. As a representative he helped balance the State of Florida’s budget eight times.

Prior to being elected to the Florida House, Representative Rivera worked with Office of Cuba Broadcasting (OCB). OCB was managed under the auspices of the U.S. State Department and was responsible for administrative and management oversight of Radio and TV Marti, the official U.S. government broadcast services to Cuba. Previous to his services at the U.S. Information Agency, Mr. Rivera worked as Public Affairs Director for the Washington-based Valladares Foundation. The Valladares Foundation, an international human rights watch-group, was headed by Ambassador Armando Valladares, the former U.S. Ambassador to the United Nations Human Rights Commission (UNHRC).

Prior to his work with Ambassador Valladares, Representative Rivera served as a writer and researcher with the Washington D.C. offices of the Cuban American National Foundation (CANF). While with CANF, Representative Rivera researched and wrote on such issues as human rights, terrorism, political-economy, Soviet-Cuban relations, and international trade. He came to the CANF after serving as a legislative assistant to United States Senator Connie Mack and as Political Director for Miami-Dade County, Florida, during Senator Mack’s successful 1988 campaign. Previously, Representative Rivera was South Florida Political Director for Jack Kemp’s 1988 presidential campaign. In 1996 he served as the Dole-Kemp campaign manager for the southern region of Florida.

Representative Rivera has also served as a public affairs, legislative, marketing and management consultant for various political and business organizations. He is currently the chairman of the Republican Party of Miami-Dade County.

Representative Rivera graduated with honors from Florida International University (FIU) with a Bachelor of Arts in Political Science and a Master of Public Administration. He has served as an adjunct professor in FIU’s School of Policy and Management. His articles on US-Cuba relations have been published in The Miami Herald and El Nuevo Herald. Representative Rivera has appeared before organizations and the media to provide commentary on issues of concern to the South Florida community.

Born in New York, N.Y., Representative Rivera has resided in Miami, Florida for 35 years. He is a member of several civic, community and professional organizations, including the Association of Hispanic Public Administrators. Representative Rivera is fluent in the Spanish language and during his tenure at the U.S. State Department he held a Top Secret National Security Clearance from the U.S. government.

I wonder how Rivera will handle this mess. Maybe he'll fall back on his Top Secret security clearance and say that he can't talk about his supposed former company because it's a state secret.
That would be a convenient excuse.
Posted by alongthemalecon at 7:50:00 PM

Your blog is called "Along The Malecon, Stories and Photos From Cuba", yet your stories seem to stray further and further from Cuba and closer and closer to the official Cuban party line propaganda. What gives?

Eight is enough -
Thanks for your comment. I don't have a good answer to your question. Maybe I'm in a rut. I sometimes hammer away at the same things, whether they lean right or left, and my blog loses the balance I try to keep.
A few months ago, a reader who is sympathetic to the Castro government wrote me and said he didn't think I was objective about Cuba anymore because I didn't live there and had lost my feel for what it's like.
What I understood from him was that my writing had taken on the same anti-Castro tone that's common in Miami. And in his view, I was leaning too far to the right.
Now I'm leaning too far to the left.
But I guess if I can manage to at least tick off all sides equally, then I should be happy.
Thanks again for writing. Tracey

We are looking for great blogs and we would love it if you registered yours with us.

PostZoom is a directory of the best blog posts which helps readers find great blog posts and blog owners drive more traffic to their blog.

If you are interested in joining, please check us out!

Here's some free campaign advice: leave the mitt at home when visiting Fenway.