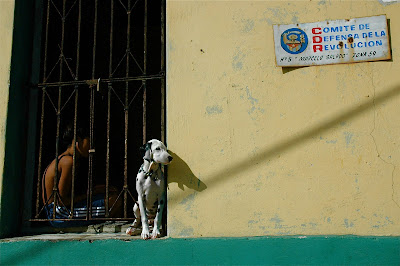 Safeguarding the revolution
A spirited debate continued today over whether two U.S. officials might have broken the law while pursuing pro-democracy programs in Cuba.
Cuba scholars Saul Landau and Nelson Valdes had criticized the work of U.S. officials in a Sept. 15 article.
In response, James Cason on Tuesday defended his tenure as chief of the U.S. Interests Section in Havana from 2002 to 2005.
Landau and Valdes today issued what they describe as their answer to Cason's "non-answer."


"The mother of all sins... the thin line between righteousness and self-righteousness."
- The Travellers' Guide to Hell: Don't Leave This World Without It," Dana Facaros and Michael Pauls

In answering our accusations of malfeasance, James Cason, candidate for mayor of Coral Gables, Florida, has lauded his own behavior as former head of the US Interests Section in Havana 2002-5. "I am proud of what I did in Havana."

We said he and Roger Noriega teamed up to create chaos in Cuba rather than follow written US government policy -- the use of peaceful means to produce "regime change." Cason forgot one small item in his answer: the answer.

Instead of affirming or denying our claim, Cason demonstrates that he feels good about his behavior in Cuba; a narcissistic assessment of himself and an attack on Fidel - which should satisfy and even amuse his close friends and family. But if Congress begins to look at his words and, more importantly, the undiplomatic action he and his boss Noriega initiated, they may find serious breaches of protocol.

We wrote that on May 20th Noriega told a radio station WQBA host about how he and Cason -conflicting with US stated policy -- sought to create confrontation with the Cuban government so that Cuba would have to declare Cason persona non grata. The expulsion, in turn, would provide the Bush Administration with a pretext to close the US Interests Section in Havana. Does Cason corroborate Noriega's radio statement? We still await an answer.

Backed by a tiny minority of angry and irrational south Florida Cuban exiles, these two State Department officials apparently behaved like mischievous boys trying to create incidents that would provoke the timid adults (Secretary of State, Pentagon and National Security team) to do what they wanted. Or did they follow a secret (not yet published?) Bush Administration policy that would not have passed muster with the Joint Chiefs of Staff and the Secretary of State: to create chaos in Cuba for the purpose of forcing a regime change - and possibly a US military intervention?

Noriega's and Cason's little conspiracy, however, led to results that apparently neither of them anticipated. Instead of kicking his undiplomatic ass out of the country, Cuba arrested 75 Cuban nationals that Cason had recruited (with offers of money, goods, services and US support). How could the head of the US Interests Section and Noriega, his superior in Washington, not have foreseen that scenario? Or, did Cason and Noriega fall into what should have loomed before their eyes as a predictable trap? Had they not read recent history?

Since the early days of the revolution, Cuba has responded to US provocations either by sending unhappy Cubans to the United States (or allowing them easy egress) or by arresting those who collaborated with their self-proclaimed enemy. If Cason and Noriega did not expect Havana to arrest the "dissidents" -- who the US Interest Section used as surrogates -- one would have to declare them either foolish or downright incompetent.

We would like to know if Cason and Noriega ever considered the possibility that Cuba would lock up 75 people who had served them and if so, did they warn these hapless Cubans of the possible consequences of repeating Washington's lines while eating Washington's food and drinking its booze inside the US Interest Section and at Cason's mansion?

If Noriega and Cason did know of Cuba's predictable response and continued to use these people to create chaos they must confront an ugly fact: they displayed a ruthless disregard for the lives and safety of 75 Cubans who went to prison for seven years.

The story should have ended there. But oddly enough, just weeks after the arrests of the 75, Cason changed his petulant behavior and actively collaborated with the Cuban government. When a Cuban hijacked a plane (April 2003), Cason went on Cuban radio and television to inform all Cubans that "The United States will deploy its homeland security forces to interdict any hijacked conveyance bound for the United States." He made clear that any one who hijacked a Cuban vessel "will be prosecuted with the full force of the U.S. legal system."

Did Noriega also turn tail and give this order? Or did the conviction of the 75 and subsequent hijacking finally cause Secretary of State Powell and the military brass to pay attention to the chaos-seeking pranksters, and order them to behave themselves?

In the three weeks between the arrests and the hijacking, Cason, the proud provocateur, morphed into an obedient collaborationist. His once euphoric supporters among the rightwing Cuban exile lobby -- Representatives Mario and Lincoln Díaz Balart and Rep. Ileana Ros-Lehtinen -- called Cason's collaborationist behavior "an act of infamy." He had betrayed his backers by cooperating "with the Cuban tyranny." (Miami Herald, July 22, 2003)

The facts: Cason - with Noriega's consent - lured 75 Cubans into a compromising position and promised them US government support. After the 75 sat in prison for seven years both Cason and Noriega still boast they are "proud" of what they did.

We shudder to think of behavior they were not proud of!

I do not know where the Cuban government gets the patience it needs in order to deal with the provocative activities of the diplomats of the capitalist United States government at the U.S. Interests Section in Havana.