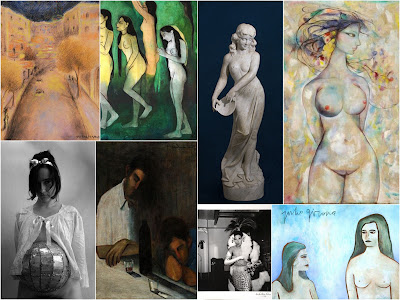 Samples of artwork to be auctioned in November. See more at: Subasta Habana
As people celebrate or lament the 50th anniversary of the ban on trade with Cuba, an auction house in Havana is getting ready to sell off dozens of pieces of art. And it welcomes U.S. citizens to send in their highest bids.
The auction website states:


In the specific case of collectors from the United States of America, it should be recalled that the purchase and sale of art works is protected by the First Amendment to the Constitution of that country, that confirms the right to free expression and free exchange of ideas. In addition, the amendment to the Embargo Act approved in 1988 specifies that “publications, films, posters, records, photographs, microfilms, microfiches, recording tapes and other information materials” are exceptions to the Embargo Act.

The auction is scheduled for 6 p.m. Nov. 28 at the Taganana Hall of Hotel Nacional in Havana.
Buyers may inspect the art, including paintings, etchings, sculptures and more, from Nov. 19 to Nov. 28 at Galería Habana. Address: Calle Línea No. 460 e/ E y F, Vedado.
Owners of the items are "the authors themselves, collectors and institutions," says the website for the auction, known as Subasta Habana.
The owners' share of the proceeds varies, depending on the amount of the winning bid, according to the contract between the seller and the auction house.
Posted by alongthemalecon at 6:38:00 AM