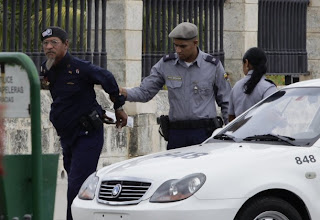 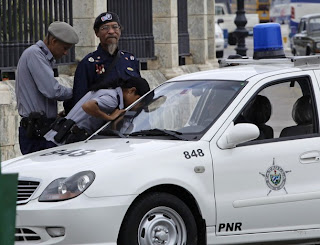 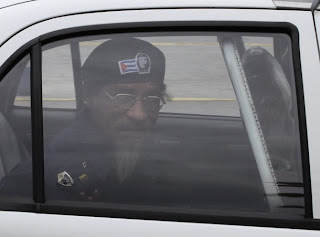 Police haul away Omar, the self-employed revolutionary.
Photo credit: Reuters. Photos found on Gaspar, El Lugareño blog
After Cuban police arrested a street actor named Omar earlier this week, one blog quickly declared:
"Free Omar! Self-employed revolutionary."
Rebels, of course, aren't supposed to be immersed in free enterprise. But Omar wanted to have his revolution and eat it, too.
So he parlayed the revolution into his own private, albeit illegal, enterprise.
He turned himself into a caricature of the original barbudos, the bearded ones who took power in 1959.
He donned a black beret emblazoned with an image of Che Guevara and stuck a huge cigar in his mouth. He began posing for cash-carrying tourists - and the money flowed, tax free.
Then along came President Raul Castro, saying that Cubans could work in private enterprise, but the government will only license 178 activities.
"Self-employed revolutionary" wasn't on the list, which left Omar wondering if he would ever get a license.
Reuters reporter Rosa Tania Valdes wrote about Omar's plight on Oct. 6. Her story began:


HAVANA (Reuters) - After 20 years of making his living unlawfully by dressing up like a Cuban revolutionary and posing for tips for tourist photos in Old Havana, 64-year-old Omar is now hoping he can make a legal career of it.
He wants to get one of 250,000 licenses for small businesses the Cuban government plans to start issuing this month so he can work without fear of official reprisals.
But like many Cubans confronting the changes, Omar does not know where to apply or what the regulations will be.
"I hope I can get legalized but that is not very clear," said the bearded amateur street actor, who wears a beret like guerrilla legend Ernesto "Che" Guevara" and pretends to smoke a big, papier mache cigar.
His illicit income up to now, all tips, has been tax free, although not without a price.
"It hasn't been easy. I have a legal action against me for harassing tourists," said Omar, who did not give his full name.

Later in the day on Oct. 6, Reuters updated the story, saying Omar had been arrested.
Guamá, a blog that spoofs Granma, the official newspaper of Cuba's Communist Party, immediately demanded that Omar be freed, calling him a "revolucionario por cuenta propio."
That post triggered a flurry of comments. Readers debated whether or not "revolucionario por cuenta propia" - self-employed revolutionary - was on list of approved activities. It was not.
Less clear was why Omar was detained. Could it be tax evasion? Impersonating a police officer?
Or maybe it had something to do with the "legal action" Omar mentions.
I have talked to and photographed Omar several times. He is aggressive in his pursuit of tips. I shot a minute or two of video of him this summer and he demanded five Cuban convertible pesos or more than $6.
I wasn't in the mood for a hassle, so I gave it to him. But I wouldn't be surprised to learn that other visitors to Cuba have complained about Omar and his tactics. 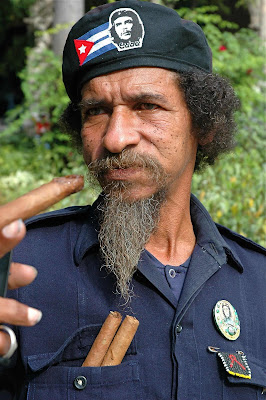 I shot this photo of Omar a few years ago. He and other Old Havana fixtures, including the women who pose with huge cigars, charge at least one Cuban peso per photo. 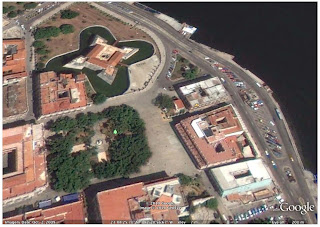 Before his arrest, Omar could often be found at the Plaza de Armas, the tree-shaded square in the lower left of this Google Earth image.
Posted by alongthemalecon at 12:05:00 PM