David Rivera sticks to his story 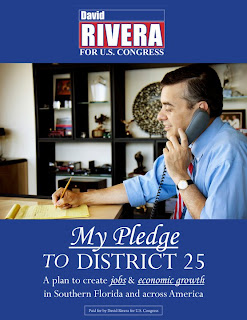 Candidate's pledge: To create jobs even if he has to make them up himself.
The Miami Herald said Wednesday:


MIAMI -- In the final days of one of the nation's most closely watched House races, South Florida Republican David Rivera faces serious questions about his claims to have received numerous contracts funded by the federal government's U.S. Agency for International Development.

That is a direct, yet understated lead. It's a conservative approach, really. Other papers might have gone with something like this:


David Rivera is hiding something. He's probably lying. And he could be making stuff up.
Welcome to Congress.

Rivera claimed on financial disclosure forms that his company carried out contracts for the U.S. Agency for International Development, or USAID.
Rivera said the company was called InterAmerican Government Relations.
USAID said it has no record of such a company.
The company did not exist in Google until the controversy erupted a few weeks ago.
The Associated Press went to company's listed address in Puerto Rico. The people at the address - a San Juan condo - had never heard of Rivera or the InterAmerican Government Relations.
Rivera is probably counting on this thing to blow over. And maybe it will.
Judge Jerald Bagley this week threw out a lawsuit to remove Rivera from the ballot.
Miami New Times reported:


Bagley didn't try to hide his skepticism over the suit, which was based almost entirely on recent reports by the Miami Herald. "What's reported in the news media ... is not always true, and secondly it's not evidence. You know that," Bagley said.

The suit, filed last Thursday by Democratic backer William Barzee, argued that Rivera should be tossed off the ballot for violating Florida's rules requiring full and honest financial statements.

Although Rivera for the last seven years has listed USAID as his primary employer, the government agency had no record of him or his company, the Herald found. Rivera then claimed that he'd instead been working for USAID subcontractors, but refused to name them.

So what's going on here? If Rivera's company had a USAID contract, why not just hand over the records? Why not clear up any suspicions?
If Rivera's company was doing work that was classified or sensitive, he should just explain that. People would understand.
Instead, Rivera sticks with what looks like a BS story.
I wonder:
Did InterAmerican Government Relations ever exist?
Was it a shell company? A cover for something illegal?
Was it a way to hide money? Was Rivera evading taxes?
What's going on here? Voters deserve to know. And by refusing to tell them, Rivera is showing disrespect and disdain for the people who pay the salaries of our politicians.
Rep. Juan Zapata told the Herald that Rivera had claimed to work for USAID, but he never knew what Rivera did. Zapata said:


He's always unclear about things, and if you ask him too much, he'll just laugh.

And Rivera could be our next congressman. The New Times said Rivera had "a healthy 7-point lead" over Joe Garcia "and looks ready to cruise to Washington, wherever his personal cash is coming from."
Garcia is the former director of the Cuban American National Foundation.
Posted by alongthemalecon at 8:04:00 PM