A defender of Sen. Christopher Dodd weighs in

The other day I wrote that Sen. Christopher Dodd shouldn't be rewarded with an ambassadorship given his inclusion on Judicial Watch's "Ten Most Corrupt" Washington lawmakers.
A friend sent me this response:


I was surprised you quoted judicial watch as a source to impeach Dodd's credibility. It is hardly a credible organization. Dodd is probably no more guilty than most in DC of benefiting from his power and has done more good things for Latin America than anyone else on the Hill. I actually prefer Bill Richardson as ambassador, but either would be great and Dodd would be more acceptable to Hillary.

I read that and decided I had better learn more about Judicial Watch. I found that Media Transparency considers Judicial Watch as "essentially a tool of Richard Mellon Scaife, who provides almost all its funding." 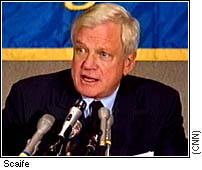 In 1999, The Washington Post called Scaife a "Pittsburgh billionaire and patron of conservative causes."
The Post said:


By compiling a computerized record of nearly all his contributions over the last four decades, The Washington Post found that Scaife and his family's charitable entities have given at least $340 million to conservative causes and institutions – about $620 million in current dollars, adjusted for inflation. The total of Scaife's giving – to conservatives as well as many other beneficiaries – exceeds $600 million, or $1.4 billion in current dollars, much more than any previous estimate.

In the world of big-time philanthropy, there are many bigger givers. The Ford Foundation gave away $491 million in 1998 alone. But by concentrating his giving on a specific ideological objective for nearly 40 years, and making most of his grants with no strings attached, Scaife's philanthropy has had a disproportionate impact on the rise of the right, perhaps the biggest story in American politics in the last quarter of the 20th century.


owns and publishes the Pittsburgh Tribune-Review. With $1.2 billion, Scaife, a principal heir to the Mellon banking, oil, and aluminum fortune, is No. 283 on the 2005 Forbes 400.
Scaife is also known for his financial support of conservative and right-wing public policy organizations over the past two decades. He has provided support for conservative and libertarian causes in the U.S., mostly through the private, nonprofit foundations he controls: the Sarah Scaife Foundation, Carthage Foundation, and Allegheny Foundation, and until 2001, the Scaife Family Foundation, now controlled by his daughter Jennie and son David.
Scaife also helped fund the Arkansas Project, which ultimately led to the impeachment proceedings of President Bill Clinton.

Judicial Watch describes itself as a non-partisan organization. Wikipedia says its activities include:


* Calling for Republican Tom DeLay to step down as House Majority Leader calling his actions on Medicare "inappropriate" and "unacceptable".
* Filing a lawsuit against Vice President Dick Cheney and Halliburton for alleged fraudulent accounting practices.
* Filing a lawsuit against the U.S. Secret Service for denying Judicial Watch’s Freedom of Information Act request for access to Obama White House visitor logs from January 20 to August 10, 2009.


Judicial Watch gained media attention when a judge in a separate lawsuit ordered the Department of Justice to releasing live video taken from relevant security cameras at The Pentagon on September 11, 2001. On May 16, 2006 the group released the videos from the two cameras on their website with hopes to "...put to rest the conspiracy theories involving American Airlines Flight 77..."
On June 20, 2007 the group released FBI documents related to the “expeditious departure” of Saudi nationals, including members of the bin Laden family, from the United States following the 9/11 attacks. According to one of the documents, dated September 21, 2001, Osama bin Laden himself may have chartered one of the Saudi flights.

Of course, I find it troubling that billionaires use their money to dig up dirt on politicians they don't like. But I don't know what can be done about that. If I were a billionaire, maybe I'd do the same thing.
What I like about Judicial Watch is that it has forced the government and politicians to release documents and other material that the public has a right to know. It has demanded accountability.
You can argue that Judicial Watch has been selective in deciding what causes to pursue. But if any group forces the government to release documents that the public has the right to know, it doesn't matter whether the organization is liberal or conservative or somewhere in between.
Let the documents tell the story. It doesn't matter who kicked them loose.
That said, perhaps I was rash in saying Dodd shouldn't be an ambassadorship given his inclusion on Judicial Watch's "Ten Most Corrupt" list. Still, I'd certainly want to know more before about Dodd before giving him that post.
Saying Dodd is "probably no more guilty than most in DC of benefiting from his power" doesn't mean he should be give a plum job. Give the position to a veteran Foreign Service officer, not a politician of questionable repute.

Link:
SourceWatch page about Judicial Watch
Fascinating, through unfavorable profile of Scaife
Posted by alongthemalecon at 7:33:00 AM