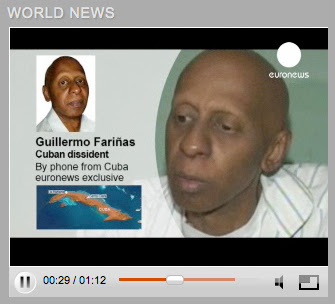 
I have to interpret this news with modesty, but also in a spirit of peaceful resistance. Modest because it’s a prize that even if given to me personally I accept on behalf of all Cuba’s exiles, political prisoners and dissidents. As I speak they are fighting for a free and democratic Cuba.

The reporter's voice-over makes it difficult to hear the entire interview. The translation says Fariñas interprets news of the award "in a spirit of peaceful resistance."
But when you listen to the recording of the phone interview, you hear Fariñas say, "in a combative way."
Maybe he said both things - "peaceful resistance" and "combative way."
Or maybe the translation needs a little work.
Not a big deal, but I'd be interested to hear exactly what Fariñas, not an approximation.
Posted by alongthemalecon at 10:27:00 AM

These so-called "prizes" are the means by which the U.S. and European imperialists finance their paid mercenaries inside Cuba. This piece of news is for the consumption of the gullible sheep.