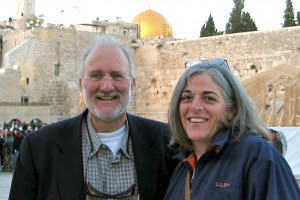 Alan Gross and his wife, Judy. Photo credit: JTA
The contractor that employed Alan Gross in Cuba is again under fire for its work in Afghanistan.
A government review found "pervasive fraud" in the Jalalabad office of Development Alternatives Inc., or DAI, according to an Office of Inspector General memo.
DAI is a regular contractor for the U.S. Agency for International Development, or USAID. In 2008, USAID awarded DAI a contract to carry out pro-democracy work in Cuba.
In December 2009, Cuban authorities arrested Gross and accused him of distributing communications equipment. He remains in custody in Cuba and has not been publicly charged.
His employer is based in Bethesda, Md. DAI employs 350 people there and "many more are on assignment at project sites in more than 60 countries," the company's website says.
In Afghanistan, the company that was providing security for DAI, Edinburgh International, paid Afghan subcontractors who likely passed along some of the money to the Taliban or their supporters, the Inspector General's memo said.
According to the memo:


The review found no indication that Edinburgh International had misused USAID funds to pay the Taliban or others in exchange for protection. However, there were indications that Afghan subcontractors working on the LGCD project had paid insurgents for protection in remote and insecure areas of Afghanistan. The payments were allegedly made as part of a security arrangement with local communities that very likely included the Taliban or groups that support them. We also found indications of pervasive fraud in DAI's LGCD office in Jalalabad and indications of endemic corruption in Nangarhar Province, where Jalalabad is located.

In June 2009, USA Today published a story that was critical of DAI's work in Afghanistan. DAI responded here and called that story unfair.
DAI has also defended its work in Cuba. The company website said:


In 2008, DAI competed for and was awarded a contract, the Cuba Democracy and Contingency Planning Program, to help the U.S. Government implement activities in support of the rule of law and human rights, political competition, and consensus building, and to strengthen civil society in support of just and democratic governance in Cuba.
The new program was also designed to help the U.S. Government address challenges raised about some aspects of its program in the past (see November 2006 GAO report). DAI was engaged on the basis of its positive track record in development, and its capacity to provide sound management and administration of key aspects of U.S. Government programs such as this one, which involves support for the peaceful activities of a broad range of nonviolent organizations through competitively awarded grants and subcontracts.