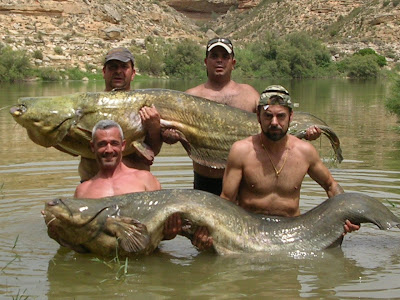 Men display huge catfish known as clarias. Photo credit: Unknown. Maria Isabel, a Cuban teacher who created a blog called El Oasis, said a friend named Ramon sent her the photo.
Yoani Sanchez last month wrote about giant hybrid walking catfish that "eat everything from rodents and chickens, to puppies and every kind of fish, frog or bird."
Sanchez' blog includes a link to a YouTube video about clarias in Cuba. Sanchez wrote:


As a solution to the food problems of the so-called Special Period, after the collapse of the Soviet block, our authorities imported this foreign species...
Whether nestling in the mud, emerging from a manhole in the middle of the city, or crawling along the side of the road, its spread demonstrates the fragility of nature when faced with ministerial directives.

April 2011 update: Juan Tamayo of the Miami Herald says the giant catfish in Cuba has become an urban legend. He said he believes the photo was taken in Brazil, not Cuba.
The spoof newspaper, Periodico Guama, published the photo in November 2010.
Posted by alongthemalecon at 8:47:00 PM