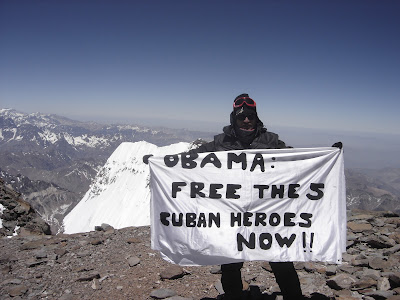 Argentine climbers demand release of Cuban Five
I was browsing through Google Images and saw this photo, above. I wondered where the photo was taken. It turns out it's from an expedition to Aconcagua, the second highest peak in the world.
Radio and TV commentator Santiago Vega, bank employee Aldo Bonavitta and social activist Alcides Bonavitta left for the summit on Dec. 25, 2009.
They reached the top on Jan. 9. Workers World said:


They planted a flag featuring a logo created by Gerardo Hernández. They also displayed a banner that reads, “Obama, free the 5 Cuban heroes now!” in English and in Spanish.