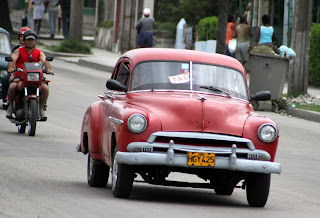 Beast of a taxi
CubaNews spotted a cool, new website for travelers. It's called Wonderful Havana. The site's creators say they started the site because they weren't happy with mainstream travel guides to Cuba. They say:


The Havana most visitors never see is a living, breathing city rich in culture and character. It is a constant revelation, with stunningly cheap yet excellent restaurants, little-known places to see and things to do; extremely cheap accommodation; semi-secret bars and clubs, and a vitality that almost defies belief given the adverse social and economic conditions people have to face.
When we first visited Havana in 2007, one thing struck us more than anything else: how badly represented one of the most colourful and exciting cities in Latin America is. The Havana we discovered, during the time we have since spent visiting and living there, does not feature in any outrageously misleading guide book or brochure-style website. We decided to form a team of people who live in Havana, and to compile a guide to the city, an online magazine that gives an independent, accurate and realistic insight into what Havana has to offer. The culmination of our efforts, three years later, is WonderfulHavana.com.

The site's editor is Eddie Lennon, described as "an experienced journalist with Irish and British national newspapers, and former editor of a leading magazine."
Wonderful Havana's staff writer is Julie Napier, "a translator and travel writer. She has spent most of the past two years living in Havana, where she has been working as a translator and content editor with a Cuban news agency."
Posted by alongthemalecon at 11:17:00 AM

Sato Travel-very lovely and all post are very good

Business Travel Agent-thank u for this tip . i will try to create this . this is very nice idea

sato travel europe-yes thx for this post because i am very upset how to create this but i read this post i am very happy thx for amazing post.

Sato Racing-Good tips! You’re absolutely right about traveling in the Fall. It will generally save money, won’t be as crowded and it isn’t scorching HOT! If anyone is looking for a good deal, be sure and call your favorite travel agent to see what’s out there. ;-)