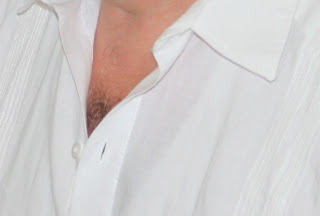 Up-close view of an "official" guayabera
The BBC reported earlier this month:


The Cuban government has announced that the guayabera - the roomy cotton or linen shirt - is now the country's official formal dress garment.
Male officials at state functions are now required to wear white guayaberas, with long sleeves and pockets in front, and two pleats both front and back.
The Foreign Ministry formulated the resolution on the guayabera earlier in the year but it has just been published into law.
The resolution says guayaberas "have been worn with pride and satisfaction" by Cubans of all backgrounds, "evolving from their rural roots to reach various sectors of the urban population".

No doubt, guayaberas are great shirts. They're comfortable, especially when it's hot. But I'm guessing that at least some Cubans would like the socialist government to cut back on all the exacting requirements and regulations and give people a little more air, you know, like a guayabera does. 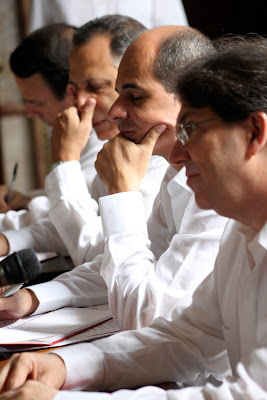 Cuban Foreign Minister Bruno Rodriguez, right, is very much in sync with the guayabera regulations.
Robert Hart comments via Facebook:


In addition to that, all citizens will be required to change their underwear every half-hour. Underwear will be worn on the outside so we can check.
- "Bananas" 1971

Speaking of undies, a Cuban defector said Fidel Castro has his underwear burned. Could that be true? Sounds like kind of an outlandish claim.
Posted by alongthemalecon at 6:35:00 AM