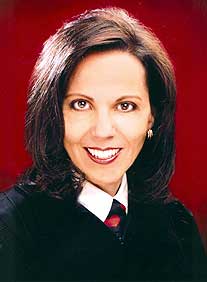 One critic said: "Judge Cardone has her own rules of procedure on a number of matters."
But heck, at least she's fit.
The Luis Posada Carriles trial is set to begin three months from today. Jury selection is scheduled for 8:30 a.m. Jan. 10, and the trial for 8:30 a.m. Jan. 11.
In June, U.S. District Court Judge Kathleen Cardone agreed to yet another delay in the trial. She wrote:


...the unavailability of a government witness, as well as the unavailability of counsel for both the government and the defense, makes trial impractical until January 10, 2011...
This is an unusual and complex case due to the nature of the prosecution and the potential for novel questions of fact and law, such that it is unreasonable to expect adequate preparation for trial at an earlier date...

I'd like to tell you what's been going on in the case and share some of the latest court filings, but they're all sealed.
This is no surprise. Cardone has conducted much of the case in secrecy. I've written about that - here and here, for instance. There ought to be greater transparency. Many questions have gone unanswered.
Secret filings prevent review, study, praise or criticism of the proceedings. But enough on that. Since there are no convoluted documents to wade through, I'll pass along something more important:
Our West Texas judge, nominated by George W. in 2003, isn't just another fine legal mind. She's a fitness instructor.
Cardone's federal financial disclosure forms, below, show she's earned thousands of dollars over the years teaching for Flex Enterprises Inc. in El Paso. The company is also known as EP Fitness.
A blog called Underneath Their Robes reported this juicy tidbit in 2005, saying that Cardone not only "appears to be rather attractive," but also "moonlights as a fitness instructor!"
A Texas Lawyer article quoted Cardone as saying:


It's a way of getting a workout. I think it's important to be fit.

What a robotic-sounding quote. But at least it was on the record.
The article also said Cardone was teaching step aerobics and spinning classes four mornings a week, and was earning $25 per class.
Cardone's financial disclosure forms are below for anyone who wants to dig deeper into this hot revelation: