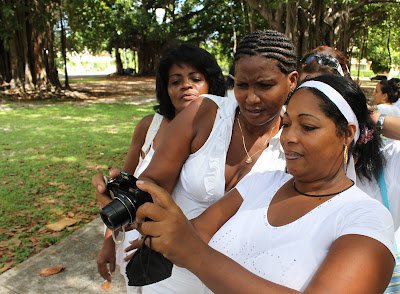 Las Damas de Blanco, 2010
Two members of Las Damas de Blanco were injured in a confrontation with police, news services and some blogs reported today.
The trouble evidently began after Sonia Garro Alfonso and Mercedes Fresneda Castillo marched in Havana carrying a sign reading, "Down with racism and long live human rights."
Police forced both women, who are black, into a patrol car. They were taken into custody and held for seven hours, the Spanish news service EFE said.
One of the women suffered a broken nose, and the other a fractured wrist, Damas leader Laura Pollan told reporters.
Details were sketchy in early reports. It was unknown how and where the women were injured, whether it was on the street, in a patrol car or while in detention.
Also unclear is why incident wasn't made public until today, and whether the women are members of Las Damas de Blanco or a support group called Damas de Apoyo.
Las Damas members are mostly wives, sisters and other relatives of political prisoners. Members of the support group generally don't have relatives in prison.
Cuban officials contend that Las Damas wouldn't march on Sundays if they didn't receive pro-democracy funds from abroad. Las Damas members deny that.
Update: The blog Uncommon Sense reports that the two injured women are members of Damas de Apoyo. See photos here. 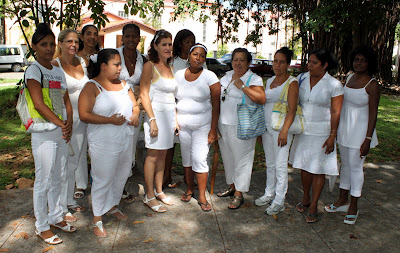 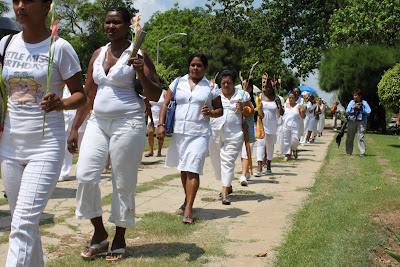 These photos were taken during the summer of 2010.
Posted by alongthemalecon at 10:25:00 PM