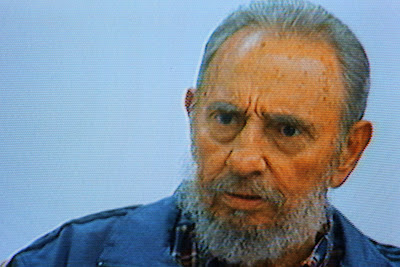 Fidel Castro on Cuban television
New on the Web is an article called "Sunrise Over South America: The Changing Face of Socialism in the 21st Century."
The author, J. Preston Whitt, is a research associate at the Council on Hemispheric Affairs in Washington, D.C.
Excerpts from the Cuba section of the article:


...among most of the domestic Cuban population, Castro appears to remain hugely popular.

Hugely popular? That is a sweeping statement. With all due respect, I don't believe the author backed up that conclusion.
I know Fidel Castro has loyal supporters. He's an icon of the past century, a legendary figure, the guiding force behind the Cuban revolution. But it's difficult to know just how popular he is today in Cuba without scientific polls.
Election results don't entirely count when voting is obligatory and the choices are so few.
The International Republican Institute, or IRI, does unauthorized surveys in Cuba.
Cuban officials object to these polls. The IRI receives much of its funding from the U.S. officials, who spend millions of dollars every year trying to undermine the socialist government.
IN 2007, Robert Sandels, an analyst and writer for Cuba-L Direct, wrote an essay challenging the reliability of IRI surveys. The people who do the surveys don't identify themselves as pollsters and find respondents by striking up conversations with people on the street.
IRI argues they must use these unorthodox methods because there is no way to do polls openly in Cuba.
I find the surveys are worth reading despite their shortcomings. According to the last one, in 2009:
Roughly four in five Cubans said their lives hadn't improved 18 months after Raul Castro assumed the presidency.
The survey said 75 percent of Cubans would vote for "fundamental political change" and 86 percent for "economic change" if given the opportunity. IRI president Lorne Craner said in a statement:


The data reveals Cubans’ strong dissatisfaction towards its leadership and their indisputable preferences for political and economic change.

Other findings from the survey:
Back to Whitt's article, the author writes:


With so much changing in Cuba, it is difficult to predict the future of the island nation; indeed, even the United States Congress seems to be preparing to make the most radical change to U.S.-Cuban relations in 50 years by relaxing its travel ban and, possibly, its embargo.

Maybe Congress is going to act sometime soon. I don't know. But I won't believe it until I see it.
Finally, higher in Whitt's article, there's this:


The era of U.S.-sponsored, direct interventions in the affairs of Latin America appears to have ended, with the U.S. instead retreating to an attempt at domination via the “dollar diplomacy” of institutions like the International Monetary Fund.

Pardon the nitpicking, but I'd argue that it's not clear the U.S. has retreated, at least not in the case of Cuba.
Posted by alongthemalecon at 7:44:00 PM

My assessment - not based on rigorous academic research, but on speaking to ordinary people in Cuba - is that Fidel is enormously popular and revered, even amongst people who would like to see significant changes.

I was in Santiago in July, when Fidel made his first TV appearance for a few years, and there was huge excitement.

It was explained to me that he is seen as a romantic and a dreamer, who would do anything, including losing his life, to achieve his dreams for the Cuban people, in the manner of Jose Marti.

I think that it's a bit like the British people and Winston Churchill at the end of WW2. When they got the chance to vote for a peacetime Government, they voted Labour and not for Churchill's Tories, yet he himself remained greatly popular for his war-time leadership.