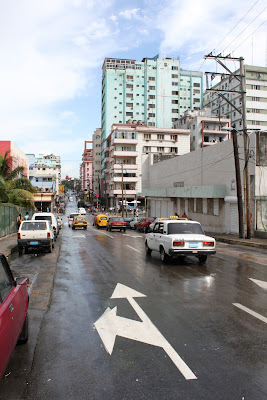 Havana
Sen. Christopher Dodd, D-Conn., is in Cuba. Radio Marti reports he may be seeking the release of Alan Gross.
Dodd, a member of the Senate Foreign Relations Committee, supports normalized relations with Cuba. He said in 2009:


For more than four decades, we have maintained an isolationist policy toward Cuba, sacrificing Americans’ freedom to travel and to trade. This approach has not only failed to achieve its stated objectives; by depriving the Cuban people of the benefit of interaction with the American people, it has inhibited a peaceful and democratic transition.
I have long believed that the United States’ most potent weapon against totalitarianism is the influence of ordinary American citizens. They are some of the best ambassadors we have, and the free exchange of ideas between Americans and Cubans is an important way to encourage democracy and build bridges between our citizens and other nations, including Cuba.

Dodd favors expanding people-to-people contact in Cuba. He has some experience in Latin America. His biography says:


Dodd, who is fluent in Spanish, spent two years in the Peace Corps working in a rural village in the Dominican Republic. Upon returning to the United States, Dodd enlisted in the Army National Guard and later served in the U.S. Army Reserves. In 1972, he earned a law degree from the University of Louisville School of Law.
Dodd was born May 27, 1944, in Willimantic, Connecticut, the fifth of six children. Senator Dodd lives in East Haddam with his wife, Jackie Clegg Dodd, and their daughters Grace and Christina.

I wonder if any back-door diplomacy is going on. Dodd could be relaying information about what Barack Obama is willing to do for Cuba in exchange for Gross' release.
Posted by alongthemalecon at 5:27:00 PM