Shifting U.S. strategy: What does it mean for Cuba? 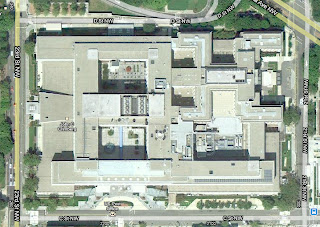 Foggy Bottom, a.k.a. the State Department. Photo: Google Maps
In July 2009, the State Department promised a far-reaching review, focusing on "global trends, policy priorities, institutional capabilities, and operational changes needed to ensure effectiveness, efficiency, and accountability of USG (U.S. government) international efforts."
The evaluation was due in September. The State Department blew the deadline. But the review - known as the Quadrennial Diplomacy and Development Review, or QDDR - will be unveiled sometime soon, Secretary Hillary Clinton said on September 28.


...sometime in the next 30 to 60 days, we’ll be rolling out the QDDR, and in it will be very specific answers to all of these questions, everything from how we change our procurement and contracting policies, to how we better train ambassadors to be chief executives of all the different missions that they’re responsible for, ultimately, in partner countries, to the personnel policies to be able to open up the State Department and USAID so that we can get the people with the expertise that is needed in the jobs that we’re doing.

I'm interested in some of these broader trends in U.S. international development strategy because they may help give clues about the direction of U.S. programs in Cuba.
It clear that the State Department and the president's National Security Council are at odds over control of international aid programs.
The Cable, a Foreign Policy magazine blog, obtained a seven-page Obama administration document that discussed taking away the State Department's responsibility for coordinating U.S. development policy. The blog said:


At issue is whether Foggy Bottom should have the ultimate authority over development policy or whether oversight should be done by the new interagency body, which reports up to the president.

Foggy Bottom refers to the State Department, whose headquarters is located in Washington, D.C.'s Foggy Bottom neighborhood.
Posted by alongthemalecon at 11:24:00 AM