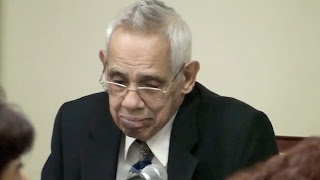 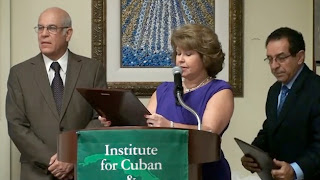 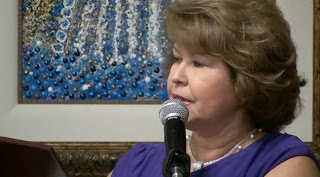 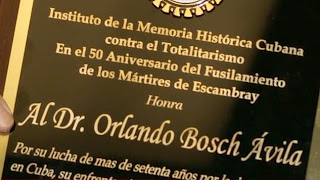 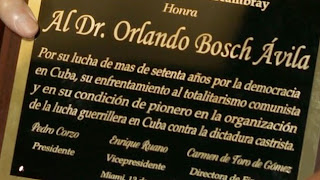 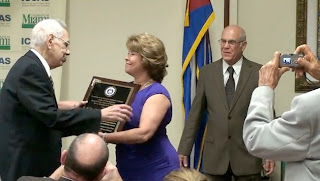 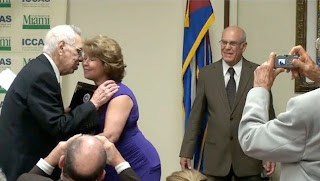 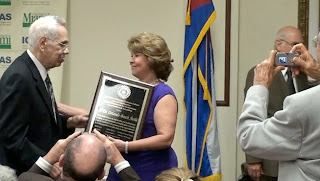 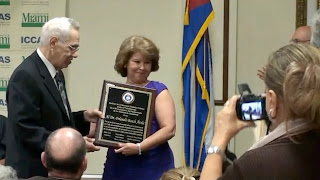 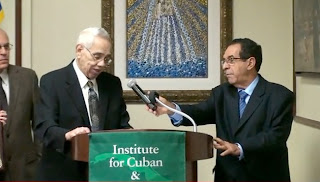 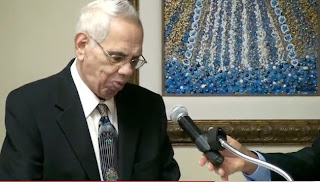 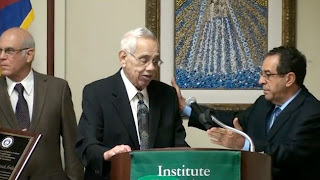 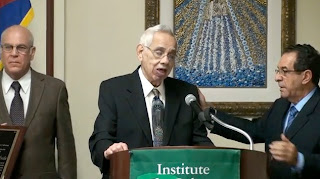 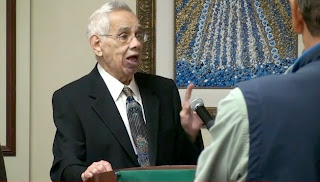 Screenshots of YouTube video
A Miami exile group on Oct. 12 honored Orlando Bosch for his decades-old fight to topple Cuba's socialist government.
A YouTube video shows Bosch making brief remarks after the Institute of the Cuban Historical Memory Against Totalitarianism introduced him, praised his vision in fight Fidel Castro early on and gave him a plaque.
Bosch accepted the award and went to the podium. He spoke briefly about finishing his memoirs and said something about his past activities. It's unclear to me what he was talking about.
Age has evidently taken its toll on Bosch. He's 84, five days younger than Fidel Castro.
In the video, a woman asked Bosch to get closer to the microphone so people could hear him. He looked up, appearing slightly confused. At that point, the institute's vice president, Enrique Ruano, comes to his rescue, telling him:

Hearing that, Bosch shuffled back to his seat.
Bosch, a former pediatrician, is a hero to some exiles. He once headed a group that the FBI described as "an anti-Castro umbrella terrorist organization."
He has been linked to murder and bombings, including the 1976 downing of a passenger plane, which author Ann Louise Bardach described as "the worst act of airline terrorism in the hemisphere prior to 9/11."
Bardach interviewed Bosch for her 2009 book called "Without Fidel." She asked Bosch if he regretted that his attacks killed civilians. He replied:


We were at war with Castro. And in war, everything is valid.

Bosch has been warring with the Castro government for decades.
According to "Without Fidel":
In September 1968, police arrested Bosch for firing a 57-mm bazooka into a Cuba-bound ship at the Port of Miami.
Authorities sentenced him to 10 years in prison. He got out in 1972.
Four years later, Bosch founded the Coordination of United Revolutionary Organizations, CORU by its Spanish initials. Its goal, Bosch told Bardach, was "to fight Castro's friends and minions."
In the years that followed, Bardach wrote, "CORU took responsibility for hundreds of bombings, kidnappings, and killings in Latin America, Cuba, and the U.S."
These acts included the Oct. 6, 1976, bombing of a Cubana passenger plane that killed 76 passengers. The CIA had advance knowledge of the bombing, according to declassified documents posted in 2005.
Bosch lives in a suburb west of Miami. I went to his house to try to talk to him earlier this year. His wife, Myriam, told me wasn't well enough to grant an interviews.
Love him or hate him, Bosch is an important figure in the history of the battle over Cuba. It's clear he has supporters in South Florida. The podium where he spoke last week was draped with a banner from the University of Miami's Institute for Cuban and Cuban-American Studies.
I look forward to Bosch's memoirs.
Posted by alongthemalecon at 7:49:00 PM

Email ThisBlogThis!Share to TwitterShare to FacebookShare to Pinterest
Labels: institute of the historic cuban memory against totalitarianism, orlando bosch