Toothbrush production up. But where's the toothpaste? 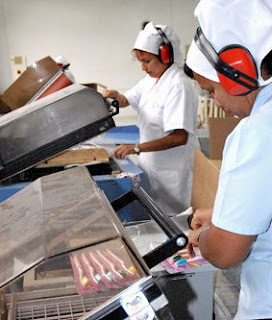 Workers churn out toothbrushes. Photo credit: Invasor
Castro loyalists last month celebrated the 50th anniversary of the founding of the Committees for the Defense of the Revolution, or CDRs, which monitor political dissent, crime and other affairs on practically every city block.
Some Cubans didn't show any excitement about the anniversary, which some people saw as a sign that the political opposition was awakening.
Actually, these Cubans were in no condition to cheer. They've been brushing their teeth with soap and salt, and now they've got sores in their mouth, journalist Yosvani Anzardo Hernández writes in a piece today.
Cuba's state-run press announced an increase in toothbrush production last year, but toothpaste remains impossible to find, the journalist writes.
Those who applauded the CDR anniversaries were only cheering because the government passed out toothpaste beforehand, he says.
But the journalist asks people not to take him too too seriously.


The government does not allow jokes about such important issues, so please interpret this news only with the seriousness it deserves.