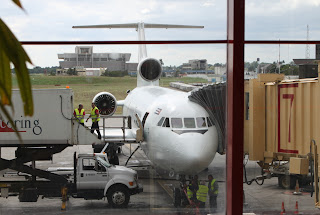 Cubana flight #152
Traffic skidded to a halt this morning at Jose Marti International Airport in Havana, stranding hundreds of travelers.
For at least an hour, no flights were entering or leaving the airport's Terminal 3. Some airport employees said no planes could take off because workers were repairing the runway.
A group of travelers bound for Buenos Aires began clapping, not to applaud the airport, but to demand information about their flight status. 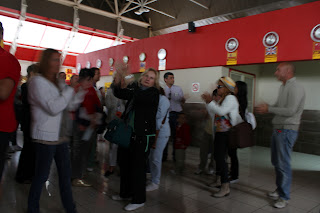 Clapping
Already, some travelers are jittery because of the AeroCaribbean crash on Thursday. Officials say the accident killed 68 people, including seven crew members.
The cause hasn't been determined, but the black box has been recovered, El Informador newspaper reported today.
Update: Some planes at Jose Marti have evidently begun moving. Others are still on the ground (including mine!). 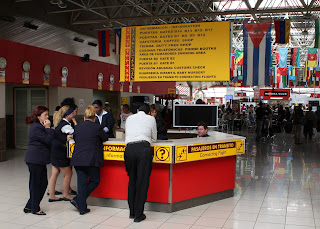 There was little information about the cause of Sunday's flight delays and the screen at the information booth went black.
Update 2: I finally got out of Cuba, but am now stranded in Cancun. I never found out for sure why my Havana-Cancun flight was delayed by more than three hours. A Cubana employee in Cancun said no planes could take off or land because workers were repairing holes in the runway. But my Cubana plane sat on the ground even after planes started flying again. It appeared workers were tending to something in the belly of the plane, and at one point a pilot stepped out to examine the plane from the ground.
So I'm stuck in Cancun with nearly a dozen other travelers. Most are Americans who were taking part in a bird-watching expedition in Cuba.
Posted by alongthemalecon at 1:18:00 PM