The leaked diplomatic cables originating at the U.S. Interests Section in Havana aren't going to be old news.
The vast majority of the 507 cables listed in a Wikileaks spreadsheet are less than five years old. About 29 percent - or 146 - are from 2009 and 2010. And more than 40 percent - or 204 - were transmitted after Jonathan Farrar became chief of the Interests Section in July 2008.
The age of the cables is important because the newer the document, the more likely it is to stir up new trouble in U.S.-Cuba relations.
The documents have not yet been posted on Wikileaks' Cablegate site, but a quick analysis of tags in the spreadsheet (see 19-page PDF version) shows that major topics of interest are Cuba's political affairs, the country's relations with other countries and human rights.

That totals 491 cables or 97 percent. Here are the years for the remaining 16 cables:

I haven't done an exhaustive analysis of the spreadsheet. But I wanted to get sense for the contents of the documents, so I searched tags to find some of the most common acronyms. Here they are, along with the number of time they are listed:

Other tags in the documents include:

The tag PTER - Terrorists and terrorism - turns up just 11 times, which is interesting considering that Cuba is on the State Department's list of State Sponsors of Terrorism. You'd think that number would be higher if Cuba were a hotbed of terrorist activity.
The acroynm PROP - Propaganda and psychological operations - gets three mentions; Venezuela gets two. These get one mention each:

Here's a link to a glossary of acronyms. Some of the tags shown in the Cuba cables aren't listed.
I don't know how many of the 251,287 leaked cables relate to Cuba. This seven-page PDF listing the leaked cables shows 507 originated from the Interests Section. A separate graph, below, shows that more than 2,000 of the leaked records mention Cuba. Perhaps that number is higher because it includes documents that didn't originate at the Interests Section. I'm sure more of this will become clear as time goes on. 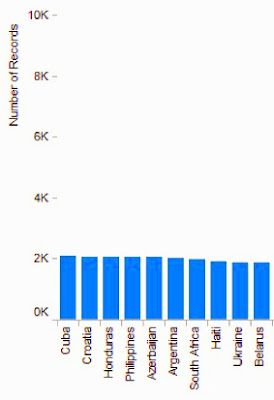