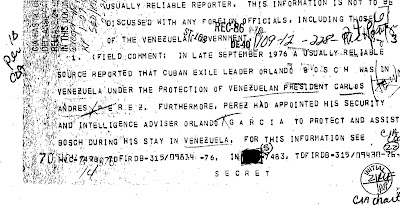 Five-page CIA intelligence report
Carlos Andres Perez, who provided protection to Luis Posada Carriles Orlando Bosch in the 1970s, has died in Miami at the age of 88, the Associated Press reports.
Andres Perez was a controversial figure who went to jail on corruption and other charges. I interviewed him some years ago while he was under house arrest at a posh residence that was perched on a hill overlooking Caracas.
This declassified secret CIA intelligence report quotes a source saying that Andres Perez protected Posada Carriles Bosch after the Cuban exile went to Venezuela following the bombing of a Cuban airliner.
The non-profit National Security Archive in Washington, D.C., obtained the report.
Posted by alongthemalecon at 7:52:00 PM