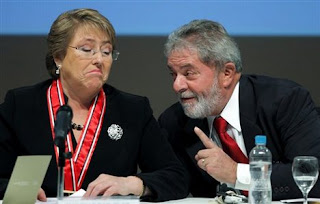 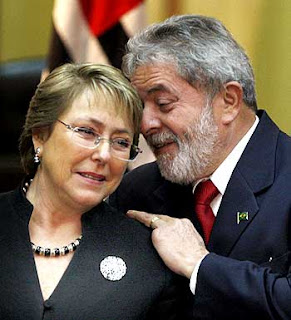 ¶1. (C) Summary: President Bachelet emphasized the need to
understand the nuances of Latin America's leaders and their
countries rather than lumping them into populist and pro-western
camps. During a January 12 lunch with A/S Valenzuela, Bachelet was
relatively upbeat on Bolivia, reserving particular praise for
Foreign Minister Choquehuanca and highlighting the many politically
moderate Bolivians. She frankly described the challenges facing
Argentina, from its weak institutions and lack of robust democracy
to its unsteady president. Bachelet holds Lula in high esteem and
feels that Brazil's leading presidential candidates are less
impressive than their current leader. End Summary.

Bolivia: More Moderate than Many Realize

¶3. (C) Consolidating the worldwide sense of hope inspired by
President Obama will be the U.S.'s big challenge going forward,
President Bachelet told A/S Valenzuela. Some leaders, including
Bolivia's Evo Morales get caught in a trap of opposing individual
U.S. officials and agencies. Similarly, there are many moderates
in Bolivia, she said, implying that some in the U.S. don't realize
this. Bachelet cautioned against lumping all of Latin America's
populist-leaning leaders together, emphasizing that Morales was
very different from Venezuela's Hugo Chavez, and that Morales had
been fairly elected. Foreign Minister Fernandez and Deputy Foreign
Minister Flisfisch added that Morales' MAS party was likely to do
well in April's local elections, further consolidating Morales'
power.

¶4. (C) Bachelet had high praise for Bolivian Foreign Minister
David Choquehuanca, who she said is more sophisticated than some
other Bolivian leaders, and is "serene and capable." Cultural
differences are important in understanding Bolivia and its leaders,
Bachelet emphasized, saying that while she had discussed economic
growth with Choquehuanca, he has a different mindset and is more
focused on quality of life than economic development for its own
sake.

Argentina: A Challenged Country with an Unsteady President

¶5. (C) Bachelet was frank about her view of Argentina, saying that
Chile's neighbor has problems with credibility as a country -- its
democracy is not robust, and its institutions are not strong.
Flisfisch added that Argentina's unusual federal system and
Peronist ideology--which can lead to political paranoia--are
additional obstacles to political and economic stability.
Argentines tend to live from crisis to crisis, the President added,
rather than pursuing stable, long-term policies.

¶6. (C) President Cristina Fernandez de Kirchner is emblematic of
Argentina's problems, the Chileans agreed. Kirchner is not
anti-U.S. by nature, Bachelet asserted, but is convinced that the
2007 "maletinazo" incident was a plot against her and will not
listen to contradictory evidence. (Note: "Maletinazo" refers to
an incident in which Venezuelan officials found nearly US $800,000
in cash the suitcase of a U.S. citizen at a Buenos Aires airport.
A U.S. assistant attorney alleged that the money was illegal
contributions for Kirchner's campaign. End Note.) In general,
Kirchner is prone to believing rumors and scurrilous press articles
and has a tendency to make unfortunate public comments, Bachelet
noted, recalling Kirchner's negative comments after A/S
Valenzuela's recent trip to that country.

¶7. (C) President Bachelet highlighted that Chile had achieved a
very positive relationship with Argentina despite the challenging
political situation there and Kirchner's shortcomings. Chile and
Argentina have a number of bilateral agreements in place and during
Kirchner's October visit to Santiago the two presidents shared the
now-famous "Maipu hug" after recalling the historic friendship and
heroism of both countries.


¶8. (C) Describing Lula as a "political fox," President Bachelet
asserted that Brazil does not play a major role in most regional
issues, despite press reports that consistently portray the country
as an important regional mediator. Bachelet views Brazil as more
interested in playing on the world stage on issues including
climate change and nuclear non-proliferation. On the other hand,
Brazil has consistently been a good ally to Chile, she asserted,
describing President Lula as intelligent and charming. Bachelet
also offered her opinion of the leading Brazilian presidential
candidates, neither of whom she believes share Lula's outstanding
qualities. She described opposition candidate Jose Serra as
arrogant and Lula's favorite, cabinet chief Dilma Roussef, as
distant and formal.


¶9. (C) Turning to Chile's fast-approaching presidential election,
Bachelet proffered the widely-held belief that there is general
agreement about policy among the leading candidates, and so the
candidates' behavior and personalities are more important than
policy differences. Nonetheless, she said that she was worried
about a potential Pinera presidency, particularly because it would
create a tremendous concentration of power (Note: Pinera is a
wealthy businessman and a number of his key advisors will likely
come from the business community. End Note.)

¶10. (C) Bachelet expressed frustration over the Chilean press'
sensationalism and anti-Concertacion bias. Every time the Frei
campaign raises questions about conflict of interest questions
surrounding Pinera's very large stock portfolio, the effort is
painted as a "dirty war" by the largely right-leaning press, which
tends to ignore the right's missteps.

¶11. (U) The Assistant Secretary cleared this cable.
SIMONS
Posted by alongthemalecon at 3:20:00 PM