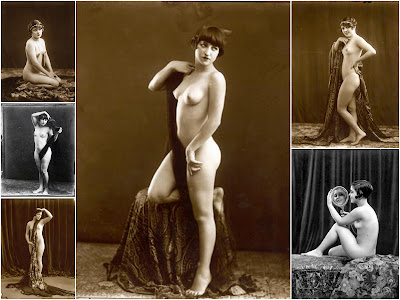 Collage of Blez photos. Source of photos: Galeria Cubana
Joaquín Blez Marcé was an innovative Cuban photographer who shot studio portraits and carefully printed artistic nudes. He won international prizes in photography and was known as "the photographer of the fashionable world," according to the Dictionary of Cuban Photography.
Blez was born in Santiago de Cuba on December 5, 1886.
In 1915, he moved to Havana and opened a studio along Calle Neptuno, #59. As his success grew, so did his studio as he moved up the street to Calle Neptuno, #210.
In 1925, Blez patented a photographic process used to obtain positive images on glass or celluloid, his biography says.

In 1927, he took part in a photographic exhibit in London. His presentation was called "Cuban Society Beauties."
Blez died in Havana in 1974 at age 87.
Posted by alongthemalecon at 6:33:00 PM