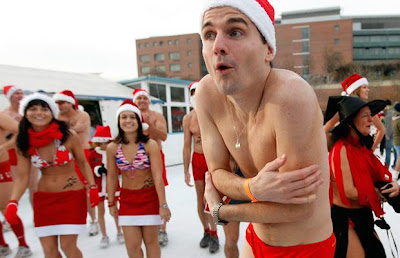 Half naked Santa run in Budapest. Photo credit: Reuters
Ileana Ros-Lehtinen, the ranking Republican on the House Foreign Affairs Committee, met Thursday with the Hungarian Minister of State for Foreign Affairs, Zsolt Nemeth, and Bela Szombati, the Ambassador of Hungary to the United States.
Ros-Lehtinen's goal: To enlist Hungary's help in pressure the European Union to toughen its position against Cuba's socialist government.
The lawmaker said:


The U.S. and Hungary are NATO allies, and we share common security interests and a common commitment to freedom and democracy.
Just two decades have passed since the Hungarian people bravely broke off the shackles of Soviet brutality, but the memory of Communist oppression is still fresh in the minds of the Hungarian people.
During its upcoming Presidency of the European Union, it is my hope that Hungary will stand strongly on the side of a group of people who are still suffering under Communist oppression – the Cuban people. As President of the European Union, Hungary will have an integral role to play in efforts to strengthen the EU’s Common Position on Cuba.
It is important that responsible nations work together to increase pressure on brutal tyrants around the globe who use every dollar they get their hands on to keep innocent people enslaved.

I posted a link to your blog and said a few good words about your site in my blog this morning. I neglect to tell you how fascinating I find Cuba and the Cuban people. Our Church sends a bus and supplies there every year. I support Pastors for Peace. Keep up the good work.

Thanks, Lou. Cuba is a fascinating place, isn't it?

I would give three of my arms to go there some day!! LOL