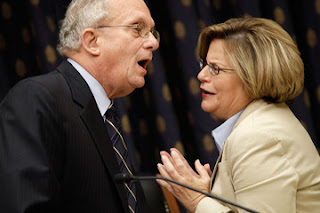 
It has been a remarkable honor and privilege to serve the American people throughout my time in Congress, and I am truly humbled by the trust bestowed upon me to defend and advance our nation’s interest as Chairman of the House Foreign Affairs Committee.
In November, the voters made it clear that if we don’t take the correct approach to policy by keeping our economy foremost in our decisions, they’re going to ship us all out. Republicans got the message and are committed to making ‘the people’s House’ work for the people again. As Chairman of this Committee, I will work to restore fiscal discipline to foreign affairs, reform troubled programs and organizations, exercise vigorous oversight to identify waste, fraud, and abuse, and counter the threats posed to our nation by rogue states and violent extremists.
I have identified and will propose a number of cuts to the State Department and Foreign Aid budgets. There is much fat in these budgets, which makes some cuts obvious. Others will be more difficult but necessary to improve the efficiency of U.S. efforts and accomplish more with less. We must shift our foreign aid focus from failed strategies rooted in an archaic post-WWII approach that, in some instances, perpetuates corrupt governments, to one that reflects current realities and challenges and empowers grassroots and civil society.
I plan on using U.S. contributions to international organizations as leverage to press for real reform of those organizations, such as the United Nations, and will not hesitate to call for withdrawal of U.S. funds to failed entities like the discredited Human Rights Council if improvements are not made.
Finally, my worldview is clear: isolate and hold our enemies accountable, while supporting and strengthening our allies. I support strong sanctions and other penalties against those who aid violent extremists, brutalize their own people, and have time and time again rejected calls to behave as responsible nations. Rogue regimes never respond to anything less than hardball.
When I first came to this country with my family as a young girl, we were fleeing from oppression and seeking an opportunity to live in freedom. In Cuba, human rights activists are condemned to the gulag and denied every basic human right and dignity. In America, I am privileged to serve in Congress and to stand up against those who seek to destroy freedom. The sharp contrast between what free nations do for their people and for the world and what rogue states do to their people and to the world reminds me every day of how important it is to stand unwaveringly on the right side of the fight. I pledge to do all that I can to isolate U.S. enemies while empowering and strengthening our allies, and I will not make apologies for doing either.

Ros-Lehtinen, a Florida Republican, replaces Howard Berman, a California Democrat. In the photo, above, the two lawmakers talk before a November 2009 hearing on the U.S. ban on travel to Cuba. Photo credit: Chip Somodevilla/Getty Images North America.
Posted by alongthemalecon at 3:11:00 PM

What a hypocrite!! sickening...