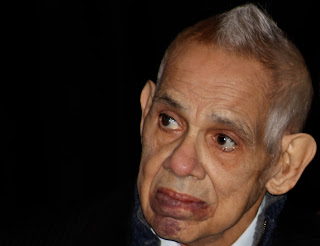 Orlando Bosch
In his memoirs unveiled last week, former pediatrician Orlando Bosch said the most important moment of his life came when he decided that "violence was the only method of struggle left for Cubans." He writes:


I had to give up everything in my life: Family, children, friends and, mainly, my profession. It was a complete transition that I had to make: From doctor to combatant. It was very difficult for me since wars are a contest of cruelties governed by countless imponderables.

Explaining why he decided to fight, Bosch evoked the words of Cuba's founding father, Jose Marti, who:


told us that he who does not take part in war does not have moral authority to call for it.
Finally, many years ago, tired of so many tribulations and uncertainty, I allowed my conscience and my heart to be the judge in my human evolution in the struggle for the freedom of my country. My conscience became the only orator in the clamor of the country, with its pain and agony.

Bosch publicly announced his decision to "place himself outside the law and continue fighting tyranny in Cuba," according to a July 1, 1972, article in La Vanguardia newspaper in New York.
Once his "war" began, Bosch said his life took a dramatic turn. And in the years that followed, "there have been many troubles and few joys."
These passages are in the final chapter of his memoirs, entitled "Los años que he vivido" - or, "The years I have lived."
The first 14 chapters of the book are written in the third person. In the seven-page-long final chapter, Bosch suddenly switches to first person. He explains:


I want to close this brief recounting of the years I have lived writing in the first person because now it doesn't matter if passion clouds reason.

Bosch writes that he tried to make sure his memoirs stick as close as possible to the facts, "without exaggeration or sentimentalism." But there's something he wants to get off his chest: He said he is not a murderer.


I have lived for many years with the stigma that I am an 'assassin' because my enemy, Fidel Castro, decided it was so. He accused me, without evidence, of being the intellectual author of the sabotage of Flight 455 and many other acts with which I had nothing to do. Only someone who has no shame and decency can accuse another one of murder when that someone is guilty of so many thousands of deaths. He can't accuse absolutely anyone of that genocide, of that Cuban tragedy, because he is the only criminal. He and his accomplices during these more than five decades of horror, abuses and cynicism.

In this last chapter, dated July 26, 2010, Bosch writes that a peaceful transition to democracy can't begin until the "tyranny" ends.
And he warns against any negotiation with Cuba's communist government. Dialogue is "immoral and offensive to the memory of thousands and thousands of compatriots who have fallen, been jailed and repudiated, discriminated against and forced into exile."
That said, Bosch's memoirs conclude with photos - more than 150 pages of them.
Posted by alongthemalecon at 8:59:00 PM