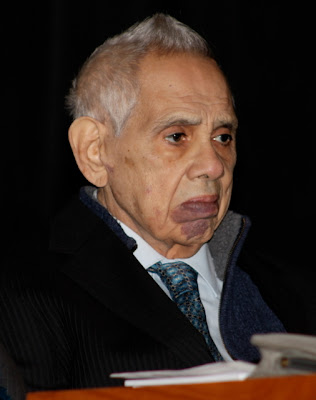 Orlando Bosch
Orlando Bosch unveiled his memoirs Thursday night in Miami as several hundred supporters praised his efforts to force Fidel Castro from power.
Speakers included Angel de Fana, president of an exile group called Plantados; Guillermo Novo,  former leader of a Cuban nationalist group, and other friends and family members.
They denied that Bosch had ever hurt or killed anyone while carrying out anti-Castro activities. That's "propaganda," they said.
Bosch spoke only briefly, but drew enthusiastic applause.
The book presentation took place inside a theater at the Koubek Center, a University of Miami facility in Little Havana.
Most of Bosch's memoirs are written, curiously, in the third person* and are entitled "Los años que he vivido" - or, "The years I have lived."
In the book's introduction, Bosch complained about the Cuban government's description of him as "Miami's No. 1 terrorist." Bosch wrote:


Fidel Castro labels as terrorism all violent actions against him.... Let's be clear: if the acts that hurt or frighten the Cuban dictatorship are terrorist, then the fight for liberty in Cuba is nothing but terrorism.


The totalitarian Castroite state has been much more terroristic than all the anti-Castro groups combined.

After the presentation, friends and relatives helped Bosch down the steps leading from the stage. He walked outside the theater and greeted an old friend: Luis Posada Carriles, an anti-Castro militant who is expected to go to trial on perjury and other charges in January in U.S. District Court in El Paso.
The two hugged each other and stood arm in arm before friends led Bosch outside.
Nearby, Bosch's wife packed up a few remaining copies of his 342-page book. Signed copies were $20 each and went fast.
Bosch didn't sign books on the spot, one of his supporters said, because he had suffered a stroke and wasn't feeling up to an autograph session. 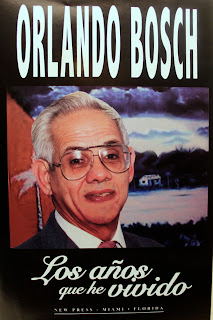 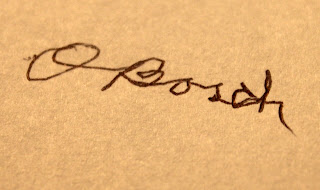 Bosch's autograph
* Initially I wrote that all of the memoirs were written in the third person. Ever astute Emilio Ichikawa was alert enough to notice that Bosch switched from third person to first person in the final seven pages of narrative.
Posted by alongthemalecon at 11:31:00 PM

It's really incredible how a murderer like this one is free after all his crimes in Venezuela, before the bombing of the plane. He says himself, "he did't hurt a soul in anti-castro activities". Remember DISIP, in Venezuela, in the 70's. Deadth squadrons, torture, genocide, dissapearences. It's all up to him an Posada Carriles. You're on your way out of this world, criminal.