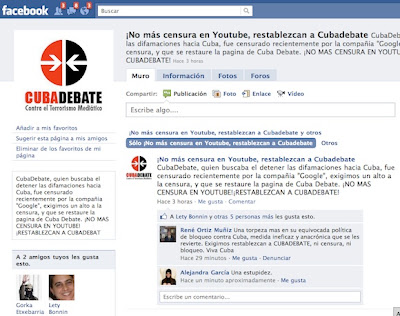 Facebook page supporting CubaDebate
Two Facebook pages - here and here - have sprung up asking Google to reestablish CubaDebate's YouTube channel.
Facebook took down a third page, a screenshot of which is shown above, which prompted some pro-Castro bloggers today to complain that both Google and Facebook are censoring CubaDebate.
The trouble began after CubaDebate posted part of a video showing incoming Congressman David Rivera at a fund-raiser for anti-Castro militant Luis Posada Carriles.
Rogelio Gonzalez, who evidently uploaded the original video, complained to YouTube and the company shut down CubaDebate's YouTube channel.

Above is a 2-minute 4-second version of Rogelio Gonzalez's video. I found this version on the Mambi Watch blog. I don't know how many versions are out there.
CubaDebate posted a 1-minute 58-second version. A notice that now appears on that video says, "This video is no longer available due to a copyright claim."
CubaDebate argues that it was using the video for non-commercial purposes and was not violating the copyright. CubaDebate has the right to file a counter-notification if it believes it has been falsely accused of copyright infringement. Google's YouTube outlines the process here.
I haven't investigated all the details, but don't understand why YouTube disabled the entire CubaDebate channel rather than simply removing the offending video.
If you go to CubaDebate's YouTube channel, a message reads:


YouTube account cubadebate has been terminated because we received multiple third-party notifications of copyright infringement from claimants including:
* rogelio gonzalez cuba

Were there other complaints besides that of Gonzalez?
On the other hand, I can empathize with Gonzalez. CubaDebate has used my material, too, without attribution, links or consideration for copyright. A recent example is the photo I shot of Orlando Bosch and Luis Posada Carriles, which appears on a CubaDebate page called Las Razones de Cuba. 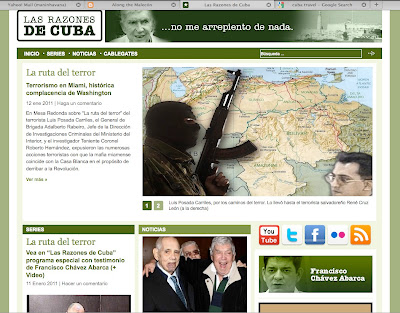 I haven't spoken to Gonzalez, but perhaps he didn't want the people he evidently opposes - Castro supporters - to use his video for their own political purposes. I can't blame him for that.
Perhaps all this is inevitable. People are passionate about Cuba. They want to share their views. And digital technology makes it easy to download photos, share videos and cut and paste text on both sides of the Florida Straits.
Of course, I always reserve my right to pursue anyone using my photos, video and other material, but I expect people to share at least some of what I post. Otherwise, why post it? It's public and it's available. It's not stuffed in shoebox in my garage. And it would be maddening to try to control how everyone uses it.
For now, CubaDebate is making a stink about censorship. Cuban government supporters can complain about the United States interfering in their internal affairs. They can complain about the embargo and other things. But I don't believe that state-run media in Cuba have the moral authority to complain about press freedom.
The censorship argument may have some traction with those who believe that big companies like Google conspire with political leaders to bash America's enemies in other nations. But I don't believe that's what's happening.
On the face of it, it appears YouTube took action because Gonzalez complained. What I don't understand is why YouTube disabled the entire channel. Did something else happen behind the scenes? Did the U.S. government pressure YouTube? I can't answer that.
Anyone know? Anyone have any insight into that?
Posted by alongthemalecon at 11:06:00 AM