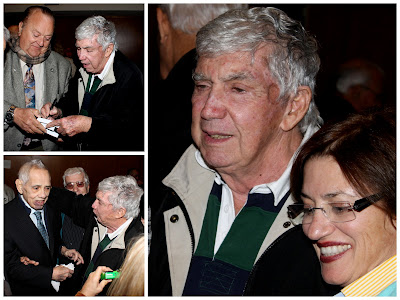 Luis Posada Carriles in Miami
Luis Posada Carriles' defense relies, at least in part, on politics and persuasion. Lawyer Arturo Hernandez evidently hopes to persuade the jury that his client's courage, his quest to free Cuba and his past service to the U.S. Army and the CIA somehow erases other mistakes he's made.
No doubt, Posada Carriles believes that the U.S. government has betrayed him.
Hernandez told jurors on Wednesday that authorities arrested Posada Carriles only after he slipped into the United States in 2005 and gave a press conference in Miami, embarrassing the federal government.
"He's a hot potato for the government," Hernandez said.
But the hot potato strategy may not work. U.S. District Court Judge Kathleen Cardone made it clear in May 2007 that she didn't care whether Posada Carriles was a "hot potato" or not.
Posada Carriles had landed in Cardone's court after he was indicted on immigration fraud and other charges. Cardone threw out that case because she said federal authorities "engaged in fraud, deceit, and trickery" when they conducted a routine naturalization interview with Posada Carriles to help build their criminal case against him.

In dismissing the indictment, Cardone said she was more concerned with justice than political hot potatoes. In a 38-page decision, she wrote:


As with each and every defendant who comes before this Court, Defendant in this case is entitled to certain rights under the United States Constitution. This Court will not set aside such rights nor overlook Government misconduct because Defendant is a political hot potato. This Court’s concern is not politics; it is the preservation of criminal justice.

She also said the case wasn't about terrorism.


The realm of this case is not, as some have suggested, terrorism. It is immigration fraud. Terrorism, and the determination of whether or not to classify an individual as a terrorist, lies within the sound discretion of the executive branch. It does not lie with this Court.
In 2006, the Western District of Texas saw 2,441 new criminal cases filed, a great number of which involve immigration charges. This Court, in particular, has been noted as having one of the heaviest criminal immigration dockets in the entire nation. As such, the issues with which this Court is currently faced are ordinary, not extraordinary. The Court routinely presides over trials and formulates sentences for defendants facing the same charges as those faced by the Defendant in this case. For example, a typical defendant convicted of all seven counts with which Defendant is currently charged would receive a maximum sentence of six to twelve months under the United States Sentencing Guidelines. In addition, any time that such defendant served in federal incarceration would more likely than not qualify such defendant for time served, or at the very least, probation.