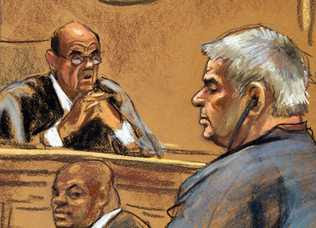 Courtroom sketch by Miguel Rajmil/EFE
Convicted hijacker Luis Peña Soltren will appeal his 15-year sentence, which his lawyer described as "grossly unfair."
Peña Soltren, 67, helped hijack a plane to Cuba in 1968 because he wanted to see his father, then spent the next four decades on the island as a fugitive.
U.S. District Court Judge Alvin Hellerstein on Tuesday sentenced the defendant to 15 years in prison. Two fellow hijackers served just four and seven years in jail.
"There will definitely be an appeal," Peña Soltren's lawyer, James Newman, told Along the Malecón. "Luis’ family members are completely supportive of an appeal. Everyone feels the same: that the sentence was grossly unfair and did not take into account Luis’ full life, as it should have."
Love for his family - not politics - drove Peña Soltren, court documents show. He took part in the hijacking because he wanted to see his father, who was in Cuba and had been in a construction accident.
A desire to be with his loved ones was again a motivating factor in 2009 when Peña Soltren traveled to New York to turn himself in and try to join family members living in the United States.
The judge said he took into account Peña Soltren's actions during the hijacking, which included holding a knife to the neck of a stewardess and a gun to her back, and endangering the lives of more than 100 people.
But Newman said he believes that "the judge’s sentence may not only be excessive, but illegal. The judge appeared to state that Luis was not eligible for parole. Although I have not had an opportunity to research this yet, my gut feeling is that he had no authority to make that provision (based upon the law in effect at the time of the crime, which is what applies here)."
The United States Parole Commission's Rules and Procedures Manual states that offenders are not eligible for parole if they used a firearm during a federal crime of violence on or after Oct. 12, 1984.
The hijacking occurred in 1968 before that rule was adopted.
Newman said "the process of appealing" the 15-year sentence will take nine months to a year.
Asked how Peña Soltren reacted to the judge's decision, Newman said:


I only saw Luis briefly after the sentencing. He was upset, but did not really articulate much to me. He is a very quiet, reserved man, and ordinarily keeps his feelings to himself.