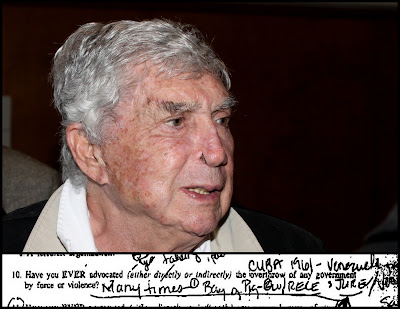 From federal court files:
Question: Have you EVER advocated the overthrow of any government by force or violence?
Posada Carriles: Many times
Federal authorities filed an indictment against Luis Posada Carriles on Jan. 11, 2007, accusing the anti-Castro militant of immigration fraud, perjury and other offenses. More than half the court filings made in the case since then are sealed, according to this 63-page docket report.
In the spirit of openness and transparency, I am posting here a selection of documents I retrieved from the U.S. District Court in El Paso, Texas.
Some of the documents are crucial to the case. Others are less important, but contain interesting details - for instance, a debate over whether transcripts ought to note whether Posada Carriles laughed or giggled during an interview.
Jury selection in Posada Carriles' trial begins Jan. 10. The trial is expected to start Jan. 11. Federal authorities accuse the defendant of immigration fraud, perjury and other charges.
If convicted on immigration fraud alone, Posada Carriles could get up to 10 years in jail and a $250,000 fine. His lawyer has argued that he should not get any more than six months in jail and may not even have to serve time, under federal guidelines.
The defendant turns 83 on Feb. 15.
Documents filed in his case are below:

...we have information that there will be protestors during the jury selection procedure. I recalled at -- the last time we were here we did have protestors. And the Court I think, intelligently changed the date or did not publish the date. I don't remember exactly. But we played around with the date of when jury selection was going to take place pretty much to a hide the football kind of thing so we could get the jurors in and out.

The words “[laughter]” “[giggles]” and “[chuckles]” appear repeatedly throughout the transcript. The United States proposes to retain these references, and would be amenable to using one uniform term throughout the transcript to reference laughter (e.g., the word “laughter” would be used in every instance, and would replace the words “giggles” and “chuckles” when they are used). The defendant objects to the inclusion of any words describing laughter, including the length of the laughter.