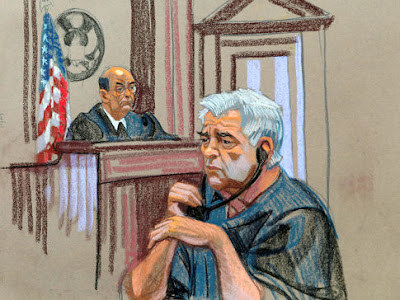 Courtroom sketch by Christine Cornell
A federal judge slapped a former supermarket worker with a 15-year prison sentence for his role in a 1968 hijacking to Cuba.
Luis Peña Soltren, who spent more than four decades in Cuba before returning to New York in October 2009, said he took part in the hijacking because he was "obsessed" with reaching Havana to see his injured father, his lawyer said.
He later called it a "disastrous mistake," expressed deep remorse and said he had tried to surrender as far back as 1979.
His lawyer, James Newman, asked for a minimal sentence and reminded the court that Peña Soltren's two fellow hijackers served just four and seven years in jail.
But U.S. District Court Judge Alvin Hellerstein was not convinced. He said it was Peña Soltren, not his companions, who held a gun to a stewardess' back and put a knife to her throat during Pan American Airways Flight 281, scheduled to fly from New York's John F. Kennedy Airport to San Juan.
The New York Daily News quoted the judge as saying:


The issue of forgiveness is for God. I wonder if there would ever be enough remorse for what you have done.

After the sentencing, Peña Soltren, who turns 68 on Jan. 15, told his daughter, Yanira Peña, 30, and his wife, Sylvia Peña, 61, that he loved them, the Daily News said.
His daughter wept and replied,

Newman told the BBC the sentence was overly harsh and said he plans to appeal. He had argued for a minimal prison term in an August 2010 sentencing memo.


Approximately forty-one years ago, he made a terrible mistake. Concerned for his father’s health and without legal means to travel to Cuba, he rashly agreed to participate in a hijacking. For decades, he has been attempting to atone for that conduct and surrender. Aside from the hijacking, his record is not only unblemished, but admirable. He has been an exemplary father and devoted husband, a devout Christian and good citizen, a dedicated worker and a good friend. He has suffered discrimination and deprivation in Cuba, without complaint. He has overcome countless obstacles, pursued higher education and raised a wonderful family. Now, he asks only that this Court take into account his entire life.

Peña Soltren's fellow hijackers said they were trying to call attention to the fight for Puerto Rican independence, the indictment shows. But Peña Soltren had no political motives, his lawyer said.
Instead, Peña Soltren said, he became obsessed with going to Cuba after receiving an anonymous letter saying that his father had undergone some unspecified surgery in Cuba.
His father was an ex-convict who had fled to Cuba in 1961 after learning there was a warrant out for his arrest.
In 1968, while still in Cuba, the father was reportedly injured after falling three stories while doing construction work. In a document filed in December, Peña Soltren's lawyer wrote:


Upon receiving the news of his father’s hospitalization, Mr. Soltren went to the office of a United States’ government agency and inquired about traveling to Cuba; he was told that it was not possible, because the United States did not have diplomatic relations with Cuba.
... Mr. Soltren believed his father was in critical condition...making the trip to Cuba an urgent matter. Further, Mr. Soltren was a man of very modest means, surviving on an income working at a supermarket. He hardly had the wherewithal to make travel arrangements to a third country, even if the law had allowed it. While these facts obviously did not justify the crime, they still remain relevant in assessing Mr. Soltren’s underlying motivation. ...he believed that hijacking was his only realistic means to reach Cuba quickly.

Peña Soltren was returned to New York on a flight that arrived from Havana on Nov. 11, 2009, and authorities took him into custody. His lawyer filed documents that he says show the defendant had tried to turn himself in.
Prosecutors said in a memo that the hijacking put more than 100 lives in danger. They said Peña Soltren deserved a "lengthy sentence" that would "reflect the seriousness of the offense."
Family members disagreed and wrote letters in Peña Soltren's support. Friends wrote letters, too, but they evidently did not sway the judge.
In this 1993 letter, below, Peña Soltren apologizes for hijacked plane's "detour" to Havana. 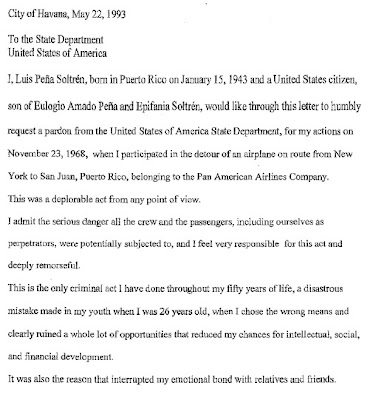 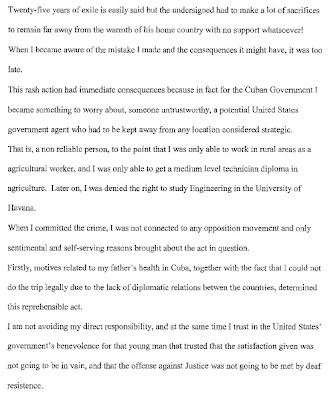