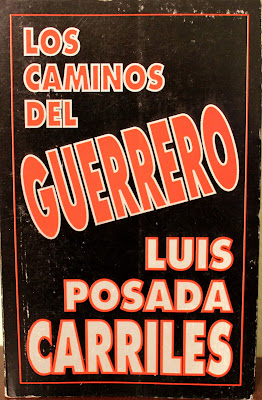 Through the long years of struggle for freedom in Cuba, Cubans have never given up, nor have they stopped fighting to banish the tyrant and conquer their beloved homeland.
Many have lost their lives in the attempt and others suffered and suffer long, cruel years in prison in the terrible Cuban prisons and other countries.
Rebelliousness and just and necessary war has been fought over time. As long as the infamous tyranny that subjugates the Cuban people exists, there will always be a patriot who, risking everything, will know to fight it.
Landings on the island, sabotage, systematic and persistent attacks on the regime, with all that has been available to the Cuban warrior, has characterized the long struggle.

We had and have great enemies ...
Nevertheless, taking the risk of being killed or languishing in prison, a group of Cuban men of honor, do not surrender, do not give up. Sometimes moving with faltering steps, sometimes firms steps, but always committed to the final battle which is approaching. We do not want any other allies than the Cuban people who suffer from hunger, misery and, above all, lack of freedom.
Since the takeover by the communist tyranny to this day, Cuban patriots have kept burning the flame of rebelliousness.
With immense difficulties, the majority of the time hindered and persecuted by their own allies, the warriors have carried out inside Cuba commando attacks on facilities, landings, sabotage of embassies and diplomatic missions, harassment of fishing fleets...the sinking of ships of Cubans and their allies. The unequal struggle has cost a string of dead and imprisoned men.
At one time, our American "friends" trained us and trained in the use and handling of weapons, explosives and incendiary devices. Yesterday what was regarded as an act of courage and patriotism, so-called "action and sabotage," is now called "terrorism" and we are persecuted and jailed for these same acts.
Years ago, the proclaimed neutrality of the country was not violated when we trained to invade Cuba, nor when the Central Intelligence Agency sent commandos and saboteurs into Cuba, carrying weapons and explosives for their actions.
Today times have changed. Any action or attack is considered an act of terrorism, violating the neutrality of the United States. Arms control laws that did not exist for freedom fighters, now apply and violators risk long years in prison.
However, nothing can intimidate us in the conquest of the freedom of our homeland. Our dead, our prisoners, our families divided, our suffering brothers on the enslaved island, from their graves, from their jails, from their destroyed homes and subjected to hunger and oppression, they demand of us any kind of action against the tyrant and his nefarious gang.
We will continue our struggle until the end, no matter what the consequences. We will not give up. We will not negotiate with the murderous tyrant. We will achieve freedom, or perish in the attempt.